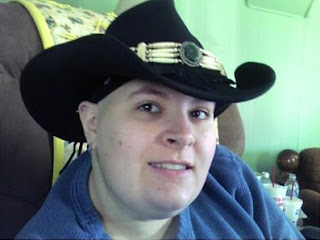 Today is my youngest cousin's birthday. Margie Lee (middle name after my mother's middle name and first name for her mother's (Margaret) twin sister Marjorie - who named her daughter after her her twin sister Margaret... Margie is also named after our grandmother - Marjorie...who has a sister named... any guesses??? Let's just say family reunions are quite interesting...)
Anyway - Margie is 24 today. You probably remember I've asked you to pray for Margie. Just before Christmas they started investigating some breathing problems and coughing bouts and just after the New Year, she was told she had non-Hodgkin Lymphoma and she began chemo in February.
I am very happy to report, as of a PET scan last week, all of the smaller tumors-- (right mediastinal and small intestines) are GONE! The large mediastinal mass on her left lung is still there but much smaller, and is now considered a residual tumor since it is not growing anymore. My aunt Margaret says, "It is melting just like the wicked witch of the west."
I really appreciate your prayers for Margie and ask that they would continue. I'm hoping to spend a good bunch of time up in her area this summer sometime. It would be great to get my kids back in "the lake" again. I don't think Michaela has actually ever been IN the lake. We'll hafta fix that...
Posted by Sara at 12:49 AM

Email ThisBlogThis!Share to TwitterShare to FacebookShare to Pinterest
Labels: Testimony