Pump Up the Pumpkin

I’ve been on a cupcake jag lately and felt I should find a flavor appropriate for the Thanksgiving season. I combined several flavors that I enjoy (and that make me think of cool, crisp temperatures) and decided the perfect opportunity to try it out was at a combination church Game Night and Bake Sale. I’m pleased to report that it was a great success of flavors and would be a sweet treat for Thanksgiving dinner that isn’t pie.. 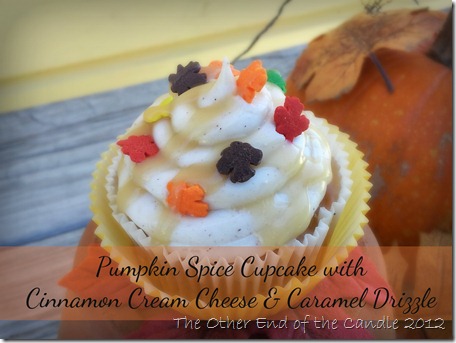 And the big bonus is… You start with a MIX! Yay! I love a good “semi-homemade” recipe.

In large bowl, beat cake mix, pumpkin, water, oil, eggs and pumpkin pie spice with electric mixer on low speed 30 seconds, then on medium speed 2 minutes, scraping bowl occasionally. Don’t overmix your batter. Divide the batter evenly among muffin cups (fill about three-quarters full). Bake at 325°F for about 22 minutes or until toothpick comes out clean when tested in the center. 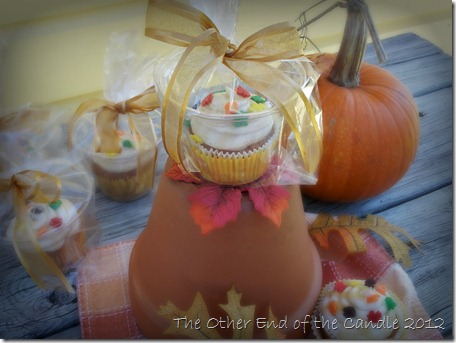 Beat butter and cream cheese at medium speed with an electric mixer until creamy.

Gradually add mixture of powdered sugar, salt and cinnamon, beating at low speed until blended. Beat at high speed 2 minutes or until creamy. That’s it! No more. If you overbeat your cream cheese frosting you’ll break down the cream cheese, and it will end up grainy looking and be too soft to hold shape when you pipe it. (Makes about 5 cups) 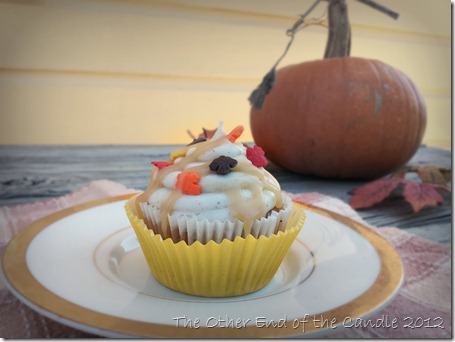 This is the easiest cupcake to decorate – all you need is a big zip-top bag. Fill it with your luscious cinnamon cream cheese frosting, snip about a half inch from one corner and swirl it on top of your cupcakes.

To add to the depth of the flavor even more, generously drizzle  some homemade caramel over the top of the frosted cupcake. Oh man!! You won’t believe the flavor… this is really simple, impressive and oh so good!

Combine butter and sugar in a 2-quart heavy saucepan and cook over high heat, stirring occasionally, until mixture is caramel-colored, about 4 to 5 minutes. Remove from heat, and slowly add cream, stirring constantly until blended.

Be sure it’s cooled sufficiently before you drizzle. I like a little candy decorating bottle for this, but you could do your drizzling with a spoon or out of the snipped off corner of a bag.

You could add the little Wilton leaf sprinkles if you want, but it’s even pretty without them. 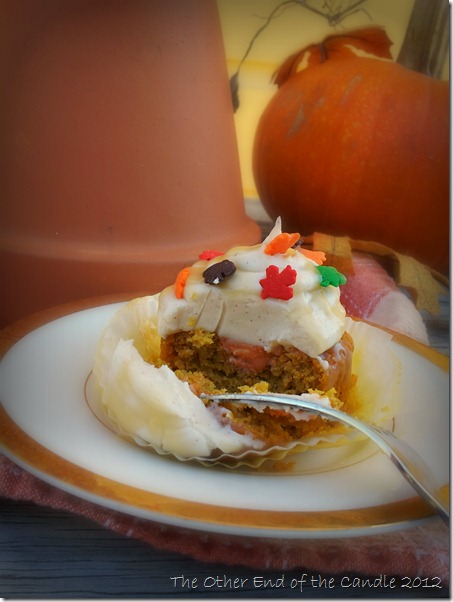 Now you might notice a little hint of something orange there are the top of my cupcake in the photo above. That’s an upside down Pumpkin Spice Hershey’s Kiss. I pushed it into the cupcake while it was still very warm.

There are a couple of reasons. First, it’s overkill – you don’t need it – it’s actually too much.

Second, this cupcake will need to be refrigerated because of the cream cheese in the frosting. (Assuming you don’t eat them all at once…) That will just make this Kiss get hard and cold. It’s not quite as tasty that way. So just leave it out.

So, mix it up on your dessert table on Thursday, pass on the pumpkin pie and try a pumpkin-y cupcake instead.

I’m linking up with

Long ago (like about 30 years) and far away (in the Inland Empire of southern California) when I was but a wee child (in seventh grade) I had my first taste of THE most amazing dipping sauce ever. It happened on a “movie night”, a traditional fundraiser for our little parochial school, there in the foothills of the San Bernardino mountains. 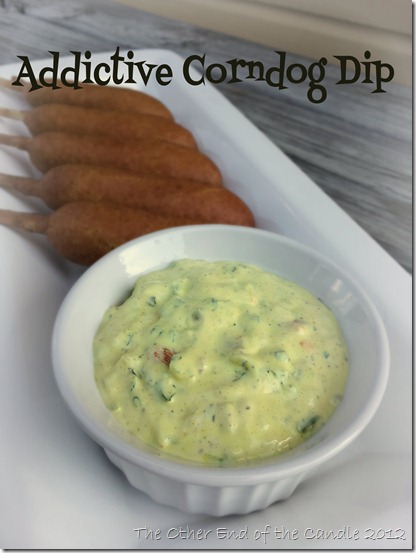 Movie night back then was a pretty big deal. Yes, children, this was long before we were able to watch movies on our phones or in the back of the minivan, long before the DVD vending machine and even before the VCR (or trendy Betamax)  was common in every household. The movies were actually rented for several hundred dollars and were reels of film delivered in a can (or two) played back on a temperamental dinosaur sort of contraption.

On fall and winter nights we watched such film greats as The Snowball Express, Apple Dumpling Gang, and My Fair Lady (with the volume obviously turned down during the swearing parts…I feel sorry for the poor sap that had to memorize each spot.) 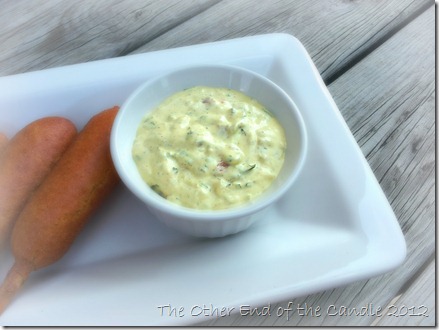 But the movies were never the main event. What you really came for, (besides sneaking outside with your friends) were the hand dipped (vegetarian) corndogs and the incredible dipping sauce served with them. You’ve never had anything like it. (Unless, of course, you’ve actually had it…)

After decades of yearning for this sauce my mom finally dug up the recipe for me. I haven’t been the same since. Once you try it you won’t be able to thoroughly enjoy a corndog again without it. Our current plan is to have the children make it regularly, bottle and sell it and put themselves through college. 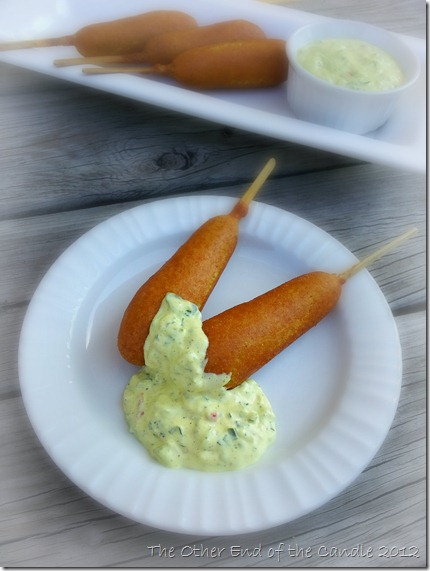 Circa 1983
Mix together and keep refrigerated:
These measurements yield about 2 quarts of the relish, if you need to make a huge amount let me know in the comments and I’ll send you the proper measurements.

This is also an excellent sandwich spread or vegetable dip. But the real memories flood in when you serve it with a Morning Star Farms “classic” vegetarian corndog.

I’d tell you how long it keeps, but we usually don’t have any hanging around… Yes, it’s that good.
I’m linking up with

When I first created the post tag for ADRA (Adventist Development and Relief Agency) I didn’t think I would use it much. Unfortunately, their services are needed for disaster relief once again in the wake of Hurricane Sandy.

You can donate by clicking here.

Please pray for those affected by this storm in Jamaica, the Dominican Republic, the Caribbean, and the United States. 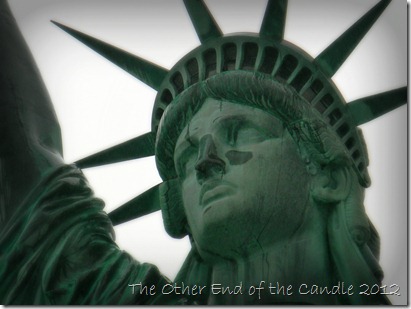 In the event that donations exceed what is needed for Hurricane Sandy Relief and Rehabilitation, ADRA will redirect funds to other like activities worldwide to help children, women, and men in need.

Hurricane Sandy brought 3 days of devastating rains and winds throughout the Caribbean and the United States. ADRA is providing clean water, food parcels, and blankets to families in some of the worst affected communities in the Dominican Republic where more than 1,200 homes were completely submerged in mud. In Jamaica, ADRA has already distributed blankets and is currently assessing the damages to homes to assist in the rehabilitation efforts.

In the United States, ADRA is working through local partners, to provide household cleaning kits to help deal with the residual effects of flooding, hot meals, warm blankets, and personal care kits. Hurricane Sandy's aftermath is likely to be severe and the scope of it's impact will continue to unfold in the coming days and weeks.

Your support, pooled with other resources, will help us meet the basic needs of those suffering from this disaster.

Back From My Apparent Nap

It's been far too long since I've posted anything here. Let's kick off November with this little graphic nugget of information.

P.S. If you have any questions about homeschooling or how to get started just holler and I'll see if I can't point you in the right direction. We're in the throws of our 9th year at it here, and some days I still feel like a beginner, but I'd say it's going pretty well and I don't regret it for a minute.

Created by: CollegeAtHome.com
Posted by Sara at 11:51 AM No comments: