Just how long does it take to bounce back after spending a week in a foreign environment?

What if you have 30 fresh flower Mother’s Day corsages to have ready a week later? 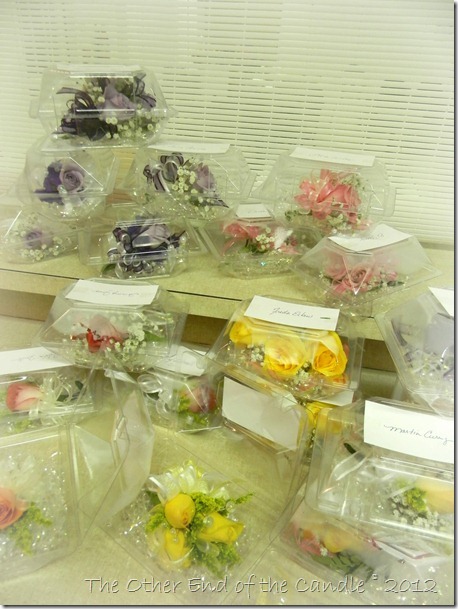 Seems about sufficient to me. I’d say I’m almost there. Almost.

I did finally empty the last bits from my suitcase a few days ago – the hotel shampoo, the leftover brochures and the bags of airline peanuts.

It’s difficult to know where to begin telling you about this most amazing trip. I can say that the little airplane job my babies’ daddy did (which presented the opportunity to make the trip) was called an “Annual Inspection”. Well, boys and girls, that right there tells me I could be going again! I’m still formulating the plan to convince him that he can afford to take me again.

It is an expensive trip for sure, but we did find several ways to save some bucks. You just have to know when to book your flight,  where to book your hotel, and where to buy your Band-Aids.

Yes, my friends, I fell in New York City. No less than four times in the first three days. 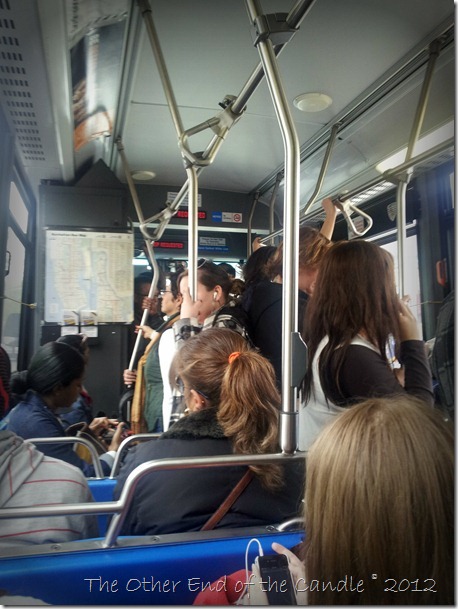 On the bus. It wasn’t quite this crowded when I fell – I had a little room to lurch into a man’s lap when the bus driver pulled away from the curb. I’m convinced they do this on purpose to people they’re picking up at the airport – just to get them acclimated quickly to how a city bus works.

Next (also the first day) I fell here: 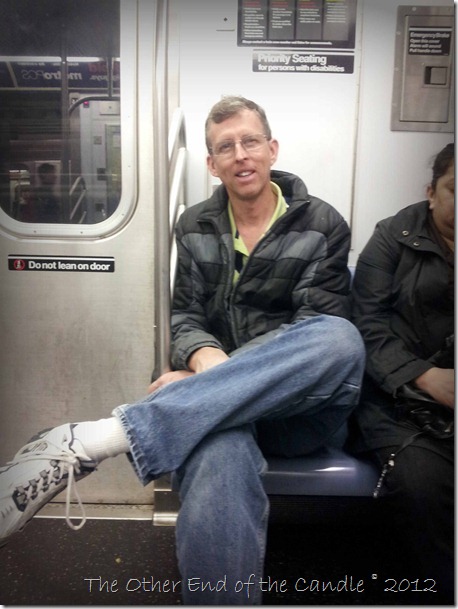 On the subway. In fairness, the subway operator didn’t know when to lurch the train purposely to make me fall (unless there’s a hidden camera somewhere, which there very well may be…) Thankfully, this time I didn’t fall completely, and this time it was into my husband’s arms (or more accurately, clawing into his chest with my fingernails for balance.

It only took once. After that I was able to keep my balance on crowded, moving, subway cars. 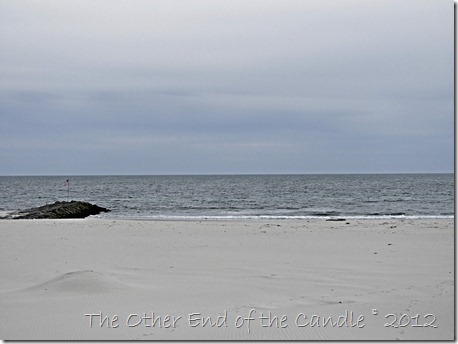 Atlantic Beach. More precisely, on the boardwalk (marked “residents only”).

This time I went all.the.way down… That’s a lotta woman on the ground people. Not pretty. Thankfully, it was Sabbath afternoon, cold and windy, and we were in a very Jewish part of town. It was deathly quiet – and we didn’t see anyone else, or more importantly, they didn’t see us. It’s tough to walk without your knees touching the inside of your long, denim skirt and I’m sure amusing to watch.

Next we I hobbled off to find some Bactine and the first box of bandages. I can tell you, even the Band-Aids cost more in New York.

And the final time I fell was here: 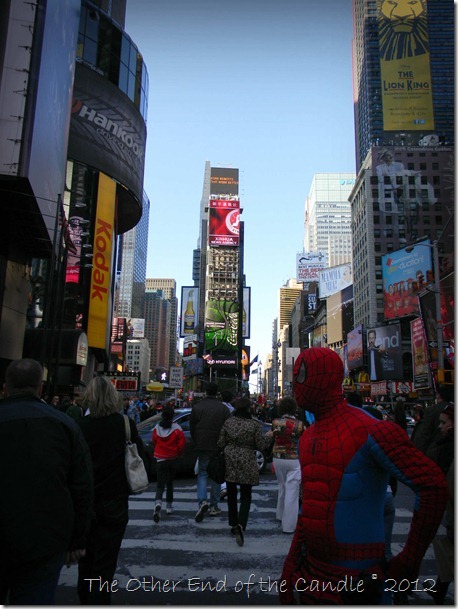 Time’s Square. Not this exact spot, but in a crosswalk in Time's Square. I would have been beyond mortified to trip in front of fanny-pack-wearing Spider Man. Instead I went stumbling, both hands in front of me, pressing down hard on the rolling carry-on suitcase of the fabulous flight attendant that was our temporary guide. His suitcase was the only thing that kept me from kissing asphalt! He had seen our confused faces studying the map in the subway (currently experiencing renovation and construction updates) and offered to help us navigate our way from our stop to the Port Authority. He even apologized for tripping me which saved me from having to admit that it was a faulty step on a manhole cover that sent me flailing.

I was willing to bet that I was going to fall here: 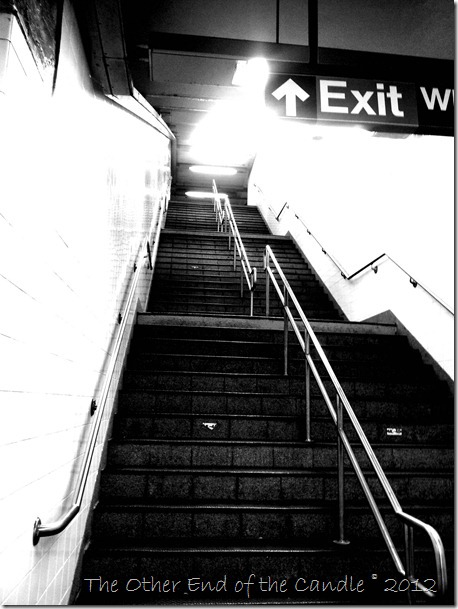 Every day. Several times a day. In fact, the stairs we’re the biggest surprise for me. I hadn’t thought about the fact that I would have to hike up and down three stories worth of stairs each time I entered or exited a subway station.

Must we talk about the handrails? I don’t want to think about it… because with the failing knees of an ample woman not holding the handrails in the subway wasn’t an option. I had my hand sanitizer and I used it often.

I could go on and on about our trip, it was really wonderful and I can’t wait to do it again,  but instead I’ll just share some anecdotes and a very small portion of the photos I took – some I played with on www.ipiccy.com or www.instagram.com,  especially those that are more familiar and have been taken so many times by so many others.

To share all my favorites, it will probably take a several days, so if this idea bores you wait to check back until later next week. 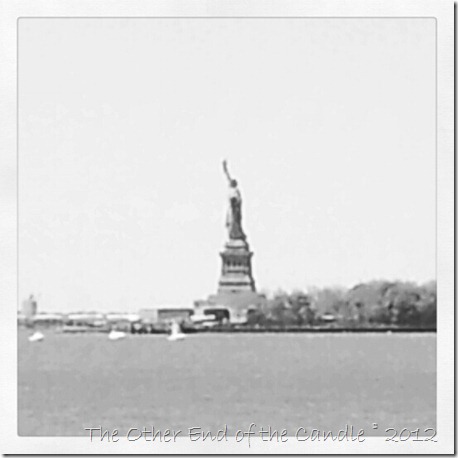 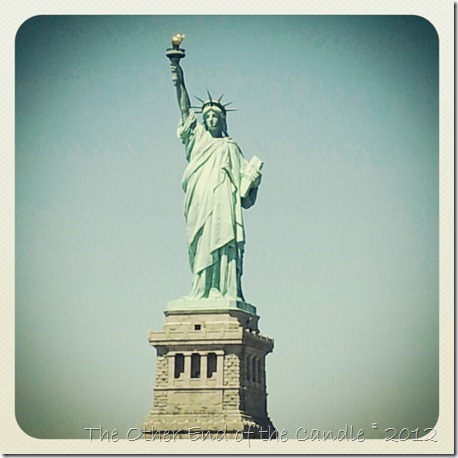 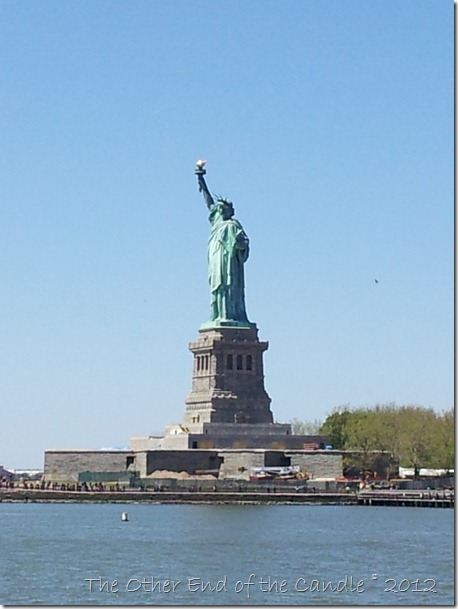 Seeing Liberty was probably the highlight of the trip for me. Unfortunately, she’s closed for renovation right now, so we were only able to walk around the outside. Next trip I plan to go inside and maybe even climb the hundred and fifty-some steps to the top of her crown. 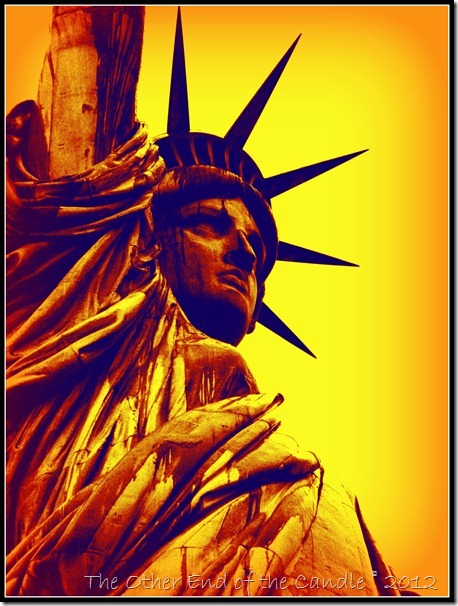 The first day we planned to go out to Liberty Island it was very sunny and beautiful, but the security line to board the ferry was at least 2 hours long. So instead we took a sightseeing cruise around midtown Manhattan from the Hudson to the East River and back and got a few (dozen) photos then.

On the day we finally went out, it was quite gloomy, chilly and just a little rainy – but there was nobody waiting in line and we sailed through security and right onto the boat to the island. 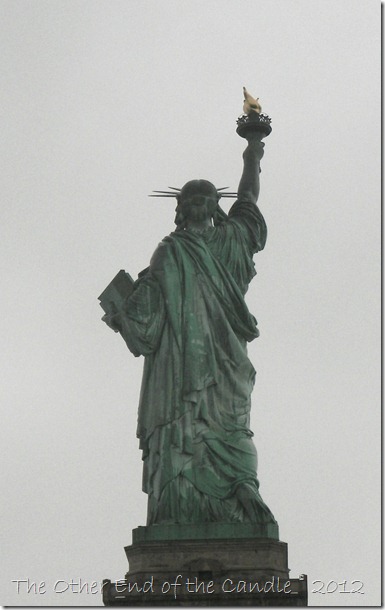 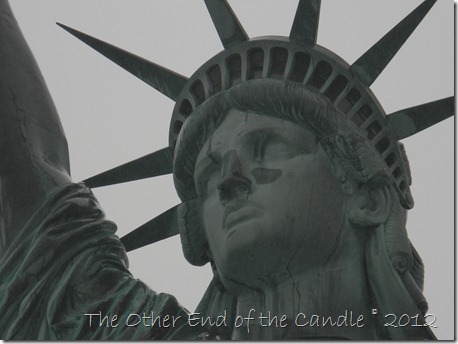 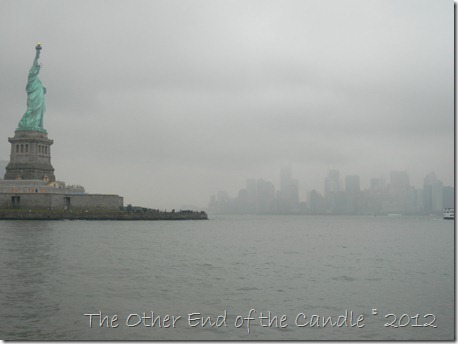 Hope you brought popcorn… I’ve got a lot more photos to share in the next few days.

And in case you’re wondering, I’m still walking  around saying, “wow…that was such a great trip” and making my list of “to do’s” for the next one.