Yesterday, in Part 1, I gave you the 4-1-1 on the LEGO marshmallow minifig pops and the inexpensive goody bags. Today we’ll look at the tablescape and refreshments and Thursday we'll attack games.

Because we were really trying to keep the budget low for this party I opted for all plain colored tableware. You can order LEGO specific stuff online, but really, I’d rather put the money into something that’s going to be around later. 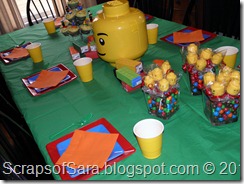 I did splurge just the tiniest bit beyond the $ .99 plates and napkins at the party store and went with the square shaped plates at Target. They were just $ .50 more and I thought they helped punch up the LEGO theme. I decided to stick with the basic LEGO colors of red, yellow, blue and orange (which is kind of a newer LEGO color) and used the classic “base-plate green” for our paper table cloth. Easy peasy and it all wadded nicely when it was time to clear the table for a game. 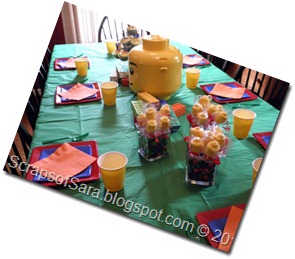 The menu could not have been easier. We served every 11-year-old boys/ favorite meal… cheese pizza. And the grocery store frozen stuff – not one of those homeschooled cherubs complained – even when the 13.5 year old cook slightly “over-golden-browned” them. I did pick up some salad fixins too and a couple of pizzas I knew the few moms there would enjoy and the boys wouldn’t touch… You know plain cheese will trump roasted vegetables, goat cheese and spinach any day for a kid.

Whenever you can get double duty from something it helps the budget. This is the case with the juice boxes. I happened to be in strolling the aisles of Wal-Mart the night before the party with a couple of my best girlfriends (you know us homeschool moms really know how to have fun) and casually said “I still don’t know what the kids are going to do for a beverage tomorrow. I guess I’ll just get juice boxes.”  Without missing a beat, my frequent cohort in party planning said, “you know… you could wrap those boxes in colored paper and make them look like LEGOs…” There went my beauty sleep, but it was worth it. We piled them on the table like LEGOs and they served as table decorations as well. 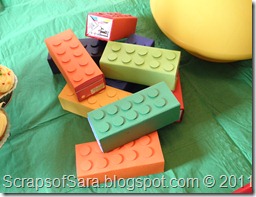 Again, use those classic LEGO colors, cut a rectangle that will fit around your box, punch some circles of appropriate proportion and stick on with some foam tape. (I highly recommend getting the foam tape at the dollar store… it can be very overpriced.) The birthday boy did his duty again and punched and stuck on nearly all of the 140 circles. No chalking this time… even this over-the-top mom has some limits.

The main theme setter for this 11-year-old boy’s birthday was the giant minifig centerpiece. This was a true splurge item – so it doubled as a gift. 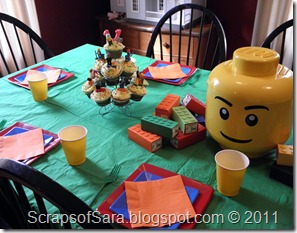 When I saw it on the shelf at the store I was really drawn since it was labeled as a “sifting sorter” for LEGOs. My longing for true organization in the LEGO bin has not been met with the same enthusiasm from my children. If I had my way, they’d all be divided by size and function and then maybe again by color… But it just isn’t happening.The “you-can’t-live-without-this” selling point for me was the fact that the instruction book specifically says “there won’t be any more LEGOs on the floor”. Seriously, if that was on the outside of the box they couldn’t keep them on the shelf. Just think – you can store the LEGOs in this ginormous minifig head rather than in your vacuum cleaner!

One more installment to go. Next time we’ll talk about the games – what the kids really come to the party for… well… that and the cake.