Recently we celebrated my middle’s eleventh birthday. Some might say we celebrate every birthday around here pretty excessively, unless you’re talking about my birthday, and I really don’t think that a few cakes and a week of special attention is excessive in that case… 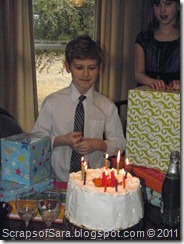 Esther Bolick’s Orange Marmalade cake of Mitford fame. Gramma made it for Jacob’s family birthday dinner and it was delish!

Even with all the extra attention for the birthday honoree, we don’t frequently have those chaotic kid’s parties that include goody bags for the guests, piñatas, games, etc. We always have a special dinner for the birthday prince or princess with our family on the weekend closest to the actual birthday, but when our first was just a baby we set a limit on the number of “those kinds” of parties we’d have – basically they’re set for what we deem the “milestone” years. 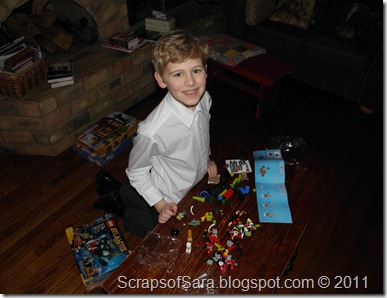 LEGOs were pretty much the only thing on his birthday wish list. He did well.
Normally, 11 wouldn’t be one of those milestone years, but Jacob opted for dinner with the family for his 10th, so we okayed the idea of having one of “those” kid parties for his 11th. Unfortunately, he came up with this plan just a couple of weeks before the big day… So the challenge before me was to come up with party that was fast and cheap! This is one of my most favorite challenges. Someday maybe I’ll change my blog name to reflect the fact that I like to be fast and cheap… or maybe not… I suspect that would breed a whole new type of reader.

Coming up with a cheap theme for the party is doubly important when your single income family is, at the current time, a no income family. Another important factor would be a wholesome theme that young boys would enjoy. Naturally, LEGO was the way to go. I figured it would be something we could pull off pretty inexpensively since we apparently have the flooring in our home made of LEGOs and most days the kids would choose LEGO's over food or drink. I figured all I had to do was empty the vacuum and we’d be nearly set.

First, the invitations were simple and cheap, and maybe just a touch tacky. It’s not usually my style, but time wasn’t on my side here and text messages were sent to the moms of 5 other known LEGO enthusiasts that would have the freedom to show up at 1 o’clock on Wednesday afternoon. Yet another advantage to homeschooling.

Next, we needed a cake that looked like it was done by a pro, but with a box cake mix price. Score with cupcakes topped with LEGO minifigures. These cupcakes are in fact a box cake mix topped with canned frosting. I almost never use the canned frosting, but time was of the essence here, and I was pretty sure the young lads in attendance wouldn’t be writing any critical articles. And if they did, the minifig topper would overshadow any icing faux pax… I use a Pampered Chef decorator to make the big icing swirls – works like a charm. 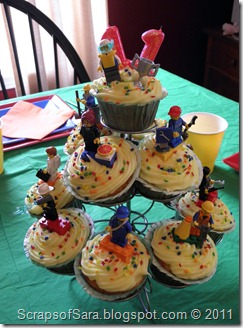 I purchased the minifig collection on LEGO.com. Buying an entire set was more cost effective than purchasing individual minifigs. They were right at $2 for each minifig rather than the usual almost $3.50, plus, each came with accessories and we had lots of leftover new minifigs to use for party game prizes and to add our LEGO collection – which I’m told was severely lacking.

For me, the goody bags are one of the biggest challenges for a kid’s party.  The bags themselves (or sometimes boxes) can be pretty pricey – even $3 or $4 each, and that’s EMPTY. Also, they’re usually filled with useless vacuum fodder that I plot to throw away the first time my kids aren’t looking. We opted to make our own. Actually, Jacob made these almost entirely by himself. We bought a pack of 10 bags at Target and Jacob punched circles from the spare bags we wouldn’t need for guests. We used a Versamark (watermark) pen to write “LEGO” on each circle, then he used a bit of colored chalk to shade the ink and the edges of the circles. He stuck them to the bags with a bit of foam tape to pop them up a bit. 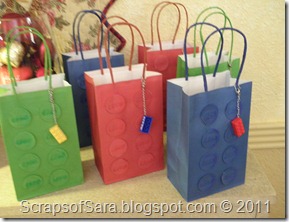 We finished them off with a homemade name tag. I drilled a set of holes in the corner of a LEGO brick with a hand drill I use for working with miniatures and attached a jewelry finding from the craft section at my local big-box demon store. I wrote each guests name with a white paint pen copying the LEGO font as best I could. I thought they turned out okay, but would have been great if they could be a keychain or hook for a backpack. (You can find the LEGO font for free online…) 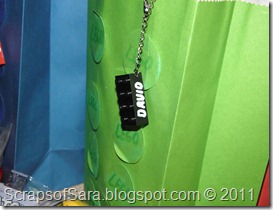 To have a well rounded goody bag I think you should have a minimum of  3 items in there, they should all fit the party theme, and at least one of them should be edible. The easiest thing would be to purchase a box of LEGOs and divide them up in little bags, but I  found a set of discontinued party favors for half price on LEGO.com. I’d give you the link, but they’ve apparently sold out. You still might find them on other sites, but maybe not at 50% off. This allowed us to put a mini model of either a jeep or a plane in each goody bag with a Legoland coupon and sign up info for a free two-year subscription to LEGO Club Magazine for about $1 each.

Another must for the goody bags was the brick candies. I found the best price on these on Amazon.com. I got 2 pounds for $15 and had enough for 9 bags plus a little pre-party tasting. Yes… I sorted the bricks and each bag got the same amount of each size. It seemed like the right (obsessive-compulsive) thing to do. I used leftover mallow pop bags for packaging the candies. (See below).

Our third item was the minifig head marshmallow pops. I found this idea on-line here. They’re just mallows on a sucker stick dipped in yellow candy melts and I used a gourmet food marker to make the faces. That was the absolute hardest part. The markers didn’t perform nearly as I’d hoped they would. Here’s a little step-by-step for you:
I used my square candle cups (if you don’t have some you need to get some… these are super versatile) filled with pretzel m&m’s to make a table decoration with the “extra” minifig pops. Each guest got to enjoy one at the party received one in their goody bag and most took one home to a sibling. 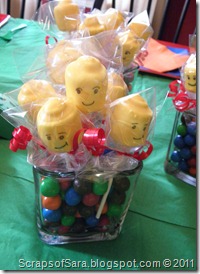 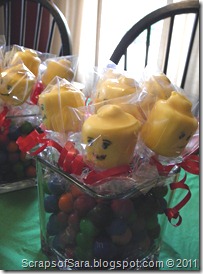 Stay tuned and I’ll tell you about the party games, tablescape and refreshments. You’re on the edge of your little plastic brick seat, aren’t you…
Posted by Sara at 5:00 AM