We’ve arrived at the final installment wrapping up Jacob’s 11th birthday LEGO-palooza – the party games.
Many times, this is the most daunting part of planning a kid’s birthday party. You want it to be fun for everyone, involve every 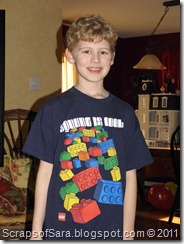 child and not require anything in your house need repair afterward.

I like to have a small prize for each  game. The obvious choice for the prizes at a LEGO party are LEGO sets. Fortunately, there are LEGO sets to fit every budget . One of the benefits of a birthday right after Christmas is that you can find a lot toys marked down – especially at places like Target and Wal-Mart that bring in extra for the holiday shoppers. There were several little stocking stuffer size LEGO sets on sale at Target and even Wal-Mart marked down the smallest Creator sets. (And keep walking those clearance aisles…now is a 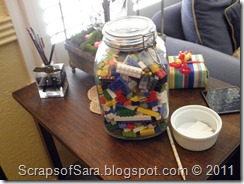 good time to start putting away toys for other gift needs that will come up the rest of the year and get them at big discounts. Even the LEGO website has a clearance section… more on that later.)

Our first game was one that could be started as soon as each of the guests arrived. It’s just a twist on the classic “jelly bean count”. In this case, we borrowed a gallon size jar full of LEGO bricks from 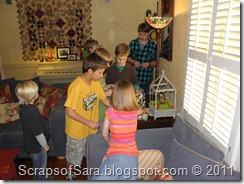 some friends – bricks that wouldn’t be used for anything else during the party. We did add one minifig to the jar that we thought had a realistic expression pertaining to his situation. He’s pictured below.
Each guest wrote down his best guess on a slip of paper with his name. No email address or phone number required and nobody will contact you later to sell you a timeshare in Florida… 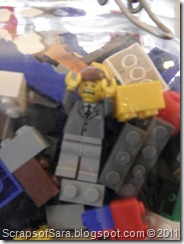 At the end of the party I revealed our winner and he received a LEGO set that I picked up for less than $5 at Target.

After the boys ate pizza and cupcakes and ice cream we handed out the goody bags that served a dual purpose.  Since the bags were each labeled with the guests’ name it was the perfect place for them to start putting the LEGOs they were accumulating, starting with the minifig on top of their cupcake. 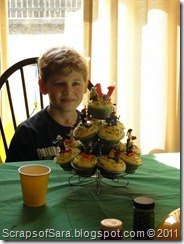 As in many cases, “three” is the magic number here – three games that require different skills so that everyone can find something that he or she is good at. And I’m just going to say it here… You’re the parent – if you have to, rig it so the same kid doesn’t win every game. Or better still, have at least one game where everyone is a winner. Our second game fits perfectly here. I think this is the one that went over the best. I wish I’d appointed someone to take photos for me so I could show you what we did. Instead, I’ll just tell you.

This game is a kind of cross between “musical chairs” and “hot potato” except nobody is eliminated from the game and everybody wins. Oh, and there are no chairs. I went to the LEGO site again and shopped in the “pick a brick” section. It’s very important that you decide your budget before you ever go to the page… you could very easily lose control. I set my limit at $15 and picked interesting pieces like flags, minifig parts, chairs, drawers, plants… No plain ol’ bricks. I even picked up a few minifig key chains from the clearance section.

Next get a cheap roll of aluminum foil and tear off a bunch of pieces that are about 12 inches long. Then choose a “grand” prize – I used a small LEGO item that was packaged in a plastic bag rather than a box. (Sometimes you find these at the Target checkout by the gum and magazines. I believe I got mine in the Christmas clearance section.) Wrap your prize in a sheet of foil and mold it into a ball. Then pick a cool LEGO from your Pick a Brick collection – put it on the outside of your ball and wrap with another piece of foil. Repeat this process until you have a sizable ball – I’d say at a minimum two layers per player and a few extras. 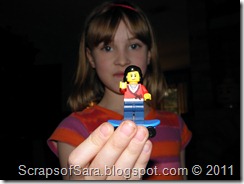 best) with their goody bags by their sides. Find a snappy song to play and have them pass your big tin foil potato while the music plays. When the music stops, the kid with the “potato” removes a layer and gets to keep the LEGO pieces in his layer. (I watch carefully and make sure everyone gets stuck with the potato a few times.)

The last game was actually a LEGO board game called Creationary. As with the minifig head I showed you in Part 2, this was a gift for the birthday boy. You don’t have to purchase the game, you could make up your own version. Get in touch with me if you’d like suggestions on how to make your own. It’s basically like playing Pictionary only with LEGOs. I kept score and we awarded 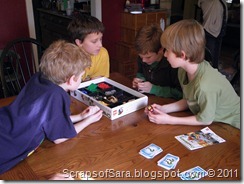 points according to the difficulty of the creation and the player that guessed also got a point. After everyone got one turn we tallied the score and the one with the most points got another $5 LEGO prize.

This party was a big hit – in fact, my 8 1/2 year old daughter has said she had so much fun she wants a LEGO party for her next birthday. the set up and clean up we’re very quick – in fact, the entire mess was cleaned up in less than 15 minutes. And truth be known, it really didn’t crush the budget. Not including gifts, the whole party came in just over $100 which isn’t bad at all for 8 guests and the amount of cool LEGOs they got to take home.

And so, I’ve resigned myself to the fact that LEGOs are part of the décor around here – we’ll walk the LEGO shuffle in the dark of night for at least the next 10 or so years.
Thanks for stopping by - You can see Part 1 here and Part 2 here.
Posted by Sara at 12:01 AM