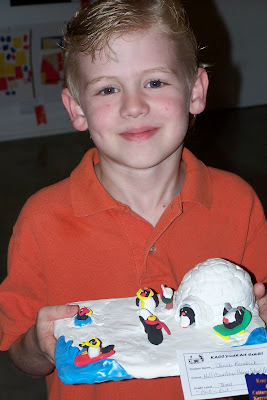 Our little art gallery in town hosts a show each spring where they feature the artwork of local grade school and high school students. The students are from local public, private and home schools. This is the first year one of my homeschool students (:0) entered a piece of artwork. 15% of all entries received blue ribbons - the remaining 85% received participation ribbons. When I saw Jacob's work, there was no question in my mind which color he'd receive :0)

Jacob entered in the 3rd grade level (all the works are divided by grades) in the sculpture category. His sculpture is called "Chillin' Out" and is made of Crayola Model Magic - his preferred medium. He goes through Model Magic like nobody's business - seems it's always a gift and he's always glad to receive it.

He's been sculpting penguins for a long time now - they seem to hold a spot in his heart. He's made them out of chenille stems (glorified pipe cleaners) as well and seems to have quite an array of little penguins in his personal collection of junque - from gumball machine trinkets and PEZ dispensers, to stickers and stuffed animals of various sizes. 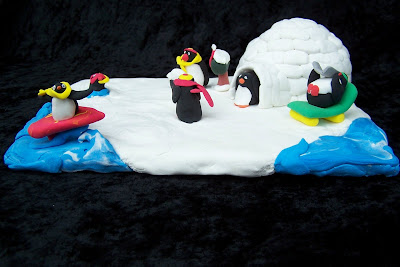 Some details to note:

The igloo is hollow. It's formed over the upside down tub that held the Model Magic.

There is a mailbox covered with snow, and apparently it has some outgoing mail...

The sculpture started out with the two penguins building the "snow penguin".

There is a hole in the "ice" and a snorkeling penguin is peeking out. There was originally a fish poking his head up as well - but he looked more like a beak with spots on it and was removed by the artist.

The "sunbathing" penguin was mom's idea, but Jacob's creation.

The last element added was the "surfer" penguin. He was originally on a toboggan, but then Jacob realized there were no hills for the toboggan to slide down and waves and a surf board were added. I really like the design of the surfboard. At the actual show, someone clearly couldn't keep their hands off and they broke the wing from the surfer penguin. It will be repaired after the sculpture comes home from the show at the end of this week.

Jacob is pretty proud of his work and has inspired his brother and sister to get their acts together and enter artwork in next year's show.