Burger Joints, Cemetaries and Other Places of Interest Part 2

This is part 2. The first part of this saga is here.

I was just saying how I made everyone come with me to a place that was one of my favorite haunts back when I lived in southern Cal. 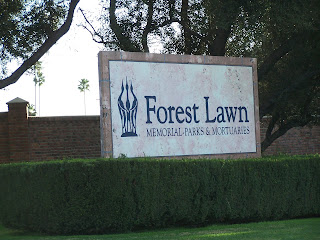 I crack myself up... 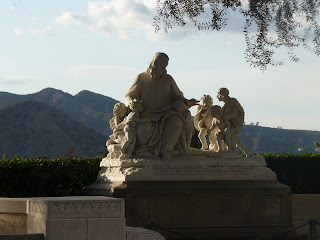 Seriously, the art work is really fabulous. Most of the great stuff is inside, though. Like the giant stained glass of DaVinci's Last Supper and full size replicas of Michelangelo's most famous marble sculptures. And I'm not a rule breaker (usually) and so I don't have photos of that fabulous stuff for you... nor do I have photos of the final resting places of Louis L'Moure, Red Skelton or Michael Jackson. Yes... MJ is there... but he's resting in an area that is chained off. 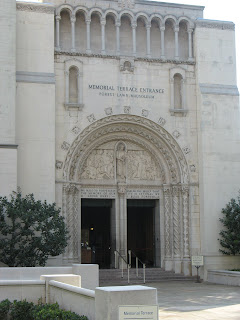 But it's in this building... and on the second floor in an area behind the Builder's Creed seen below. In fact - I think we parked right under his enormous stained glass windows... 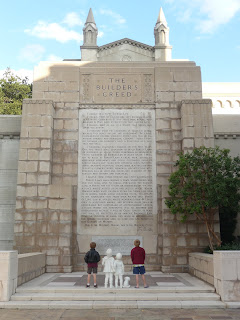 There's even a little wildlife roaming around. 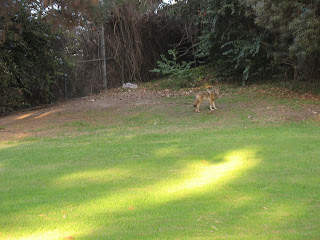 Here are my two adorable nephews at the center of the labyrinth (I think they cheated...) 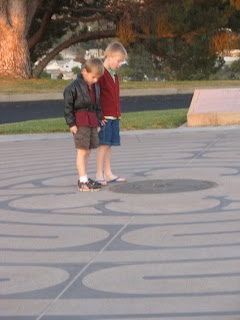 And here's me and my squeeze with the Glendale hills (and a bunch of dead folks) in the background. 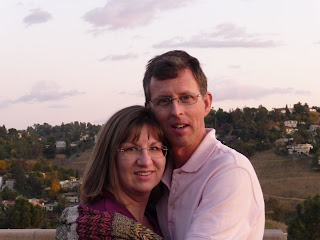 And Shari and her boys - same thing. I promised I wouldn't tell everyone that she sent a photo of her family taken at a cemetery in her Christmas cards this last year. If you see anyone in our family, don't mention it. By the way... She's the only one that's dressed appropriately! It was freezing cold there! 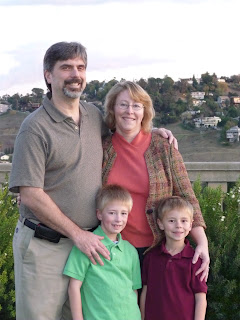 We meant to head over to the Regan Library after our little tour at Forest Lawn, but time got away from us. So we visited Costco with about 3 million and 12 other folks and snapped up a new camera to throw in my purse. (We did pay for it first...) A nice little 10 mp Panasonic with 12X optical zoom and some great features that I'm still learning how to use. (**ETA - this camera is now busted and no longer works. It did not hold up well to dropping about 24 inches to the hardwood floor. We'll see if they can fix it, but I'm not holding my breath... the LCD screen was bleeding black...) Below, my nephew, Matthew, is helping me check it out in the Costco food court after he had his pizza. Brian and I didn't eat there... we went back to In-N-Out... 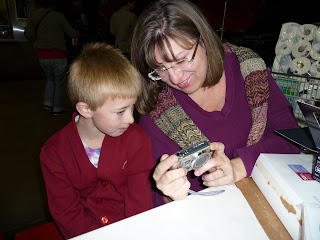 We had to leave for home on Sunday morning. It was a very short trip for sure.

Makes me want to start singing that John Denver song... 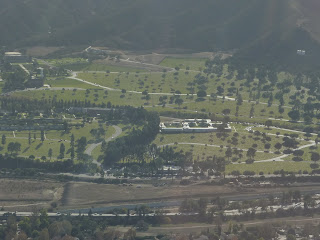 This is Glendale Forest Lawn from the air. (The green part.) 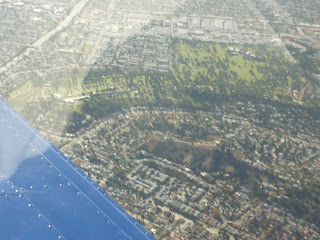 And here is my white knuckled hand gripping the handle in the plane. I really don't know what I thought that handle was going to do for me if our little plane fell out of the sky, but I gripped it nonetheless. 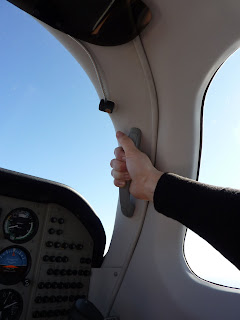 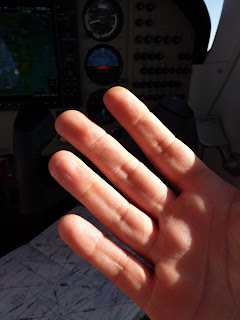 It was pretty bouncy up there... not the smooth flight we had going out, but a lot of weather to go around - thunder and snow storms.


Me and Jesus were talking a lot. Not at all because I didn't trust my pilot and have full confidence in his abilities, but because I just needed an extra boost of peace to remember who was holding that plane in the air. And, if He decided the plane needed to land quite abruptly, I had full confidence in where I'd be spending eternity when He returned to wake me.
And this is how cold it was (see how nicely the new camera zooms) in the plane. Yes... for us flatlanders that's -22° F below zero. That's pretty dang cold in an airplane with a pretty thin door... 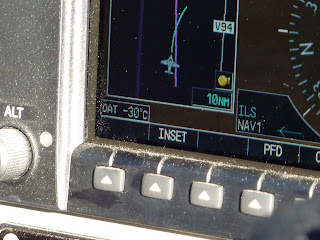 My pilot was able to finally smooth things out by flying up above the weather. That required him to take us up above 12,500 feet. The only problem with that is you have to wear supplemental oxygen that high. And really, that isn't a problem either, unless your pilot leaves his cannula in the baggage area in the TAIL of the plane. His plan was to put the plane on autopilot and crawl over the seats to get it... But I felt a little weird about him leaving his seat, beings as I was the only one left to land us if we happened to hit another air pocket whanging his head on the ceiling while he was crawling around. However, if I whanged my head while crawling around and knocked myself out, all the better for me.

So I did it. Even with the "fasten seat belt" light blazing, I flicked that bad boy off and dove between the seats to retrieve the oxygen mask and cannula. Well... maybe it was more of a "creep" than dive and I'm pretty sure I was murmuring "oh, Jesus help me" over and over again. But I did it and we climbed to over 23,000 feet where it was a lot more smooth. 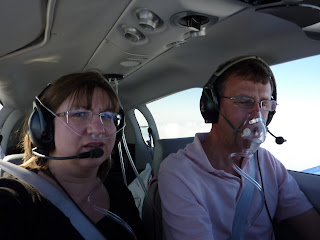 See how much happier I am here? Too bad there wasn't anesthesia in that tubing...It was nice to have the XM radio (set on the comedy channel) to distract me some.

We had to land somewhere this side of El Paso to refuel and you know... de-fuel.

I took a minute to call my mom and dad to check in and dad mentioned that he and the kids had been tracking our flight on a website called "flight aware". You just put in the N number or flight number of the plane you want to watch and you can see the altitude and airspeed, where they're going, when to expect them... all kinds of neat information.

So dad says it looks like it's been a pretty exciting flight and notes that he can see where we've kept climbing higher, dodging storms and making some pretty good time and how he's been graphing it all with the kids... I told him we could compare the notes he had with the streaks in my undies when we got home.

We loaded back up, as much as I would have rather called a cab, and hit the air again. This time we kept pretty low to the ground and did what my pilot called a "scud run". For some reason, I don't mind those as much -- even though the time you have for any sort of reaction (or long prayers) is diminished if something goes awry.

We made it home safe and sound and I once again vowed I'd drive next time... just like I did last time. But when it comes right down to it, I'd rather take the plane than the car when possible. I'm all for short trips. Especially if it's a small plane. I know the pilot, the inspector and the guy checking all the mechanics work. I know he hasn't been hittin' the bottle in the pilots lounge and that he really considers himself the co-pilot and God his pilot in command and I'm just a lot more comfortable with that.