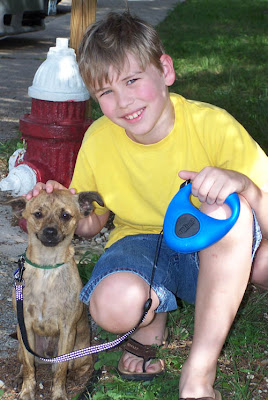 This is Oscar and Zack (Zack is on the right). He's a brindle colored Terrier mix (which I guess means "mutt") Doesn't he have a nice smile? :0} We picked him up today at the local Animal Welfare League. He was rescued from the pound, adopted by an older couple, then returned when one of them became too ill to care for him.
He'll be two years old on July 5th, eight days before our two kitties, Maxine and Samantha, turn two. Neither one of them has had a kind thing to say to the poor boy, but they haven't terrified him either. I'm surprised at how calm he's been - he's not letting the girls intimidate him but he's not egging them on either.
So far he is just a love! We've FINALLY heard him bark - we were afraid he didn't have a barker there for a bit - but the cats coaxed it out of him while he was hanging out under the dinner table while we had tacos.
Oscar is potty trained, leash trained and knows a few voice commands. Right now he's warming my lap and has stuck pretty close to my ankles since we brought him home. I think he's a wonderful answer to a boy's prayers for a dog. 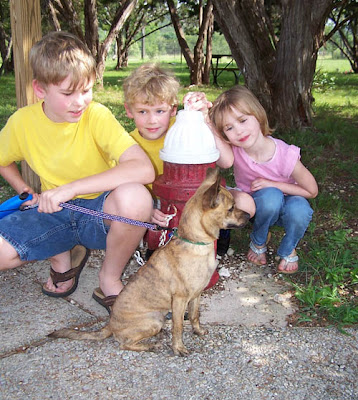 Email ThisBlogThis!Share to TwitterShare to FacebookShare to Pinterest
Labels: Oscar