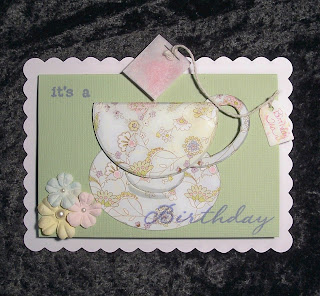 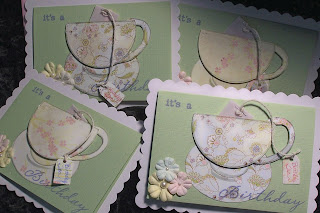 My daughter will turn 5 in a week. How did THAT happen???

I started planning her birthday party on January 23, 2002 (the day we found out we were having a girl after two boys.) Having a tea party for her 5th birthday was one of my first bright ideas when I found out I'd be the mom of a daughter. It wasn't my first thought though... that thought was, "YES! I can buy pink and flowered paper now!"
I've had a love for all things tea since the mid 90's. Back in the nineteens, Zack would say. In fact - that's where I used to spend my wad before I was a scrapbooker. I collected all kinds of antique (and antique looking) cups, saucers, salad plates, dessert plates, creamers and sugars, tea pots, silver serving trays, pastry forks, lemon forks, sugar tongs, linens... you name a tea accoutrement and I bought it!
I would either host or assist with a tea once a month for several years. I had Teddy Bear Teas, British Cream Teas, Afternoon Teas, Bridal and Baby Shower Teas, High Teas, Retirement Teas, Just Because Teas. I lived for tea. Then came kids.
That slowed me down a bit (and caused me to lock up the china...) The teas became fewer and farther between - but I still loved to do them now and again. Sometimes on a HUGE scale - like 50 to 80 guests.
I've missed "doing tea". It's just not the same to go to a tea room (though the clean up and prep is a breeze...) So this is my first tea in two years and I'm very excited to do it!
I'm trying something new for this one... I'm making a tea pot shaped cake for the final dessert at the request of the birthday girl. I'm NOT a cake maker. I can bake them OK - but the decorating part is where I get tripped up. But I'll give it my best shot and I'll post a photo of it - good or bad. You can either ooh and ahh or laugh at it.
Posted above are the invitations I made for the party. The base panel card (scalloped) is from Target. The cardstock is Bazzill (of course...) The patterned paper is Basic Grey, Lily Kate. So are the rub-ons at the top edge of the cup - but you can't see those... The flowers are Prima and the pearls are K&Co. (LOVE them). The "tea bag" is vellum (folded like a tea bag...) with a bit of glitter inside and the tags (tied with turkey string from the grocery store) are from a QuicKutz die. (LOVIN' my new QK Revolution tool too...) The stamps are Technique Tuesday clear stamps from the "Let Them Eat Cake" collection. I used Colorbox Fluid Chalk ink in Lavender for "it's a Birthday". I used a gray shadow EK Brush Pen for the shading around the cup and saucer. Those were cut with a Creative Memories circle/oval system. I used foam tape for dimension so there'd be a place for the teabag to go. :0)
The invitation reads:
How wonderful we think it would be
If you would join us for a Teddy Bear Tea.
Fifth birthdays come but only one time
And you being here will make it sublime!
Sunday coming, the third of June
At three o’clock in the afternoon.
123 Fakename Drive, Michaela's address
Bring your gloves, hat and doll in her finest dress.
We certainly hope that we’ll see you there
Call 555-2286 and we’ll save you a chair.
We don't really live on Fakename Drive - and we don't have a television phone number... but you know that if you know us...
Posted by Sara at 5:54 PM