And I may have a teensie bit of a problem...
It happened almost a month ago.
I was in Wal-Mart in the frozen foods. I was out of tater tots and needed to restock when I became distracted.
I should have just kept walking... never stopped and opened the door... but I was drawn - pulled like a bee to a flower - a magnet to the refrigerator door. I had a feeling that something was different and couldn't stand to not see for myself.
As I touched the handle of the door I received a shock. Just a bit of static build up in my flip flops - but I should have taken the warning. It just may take electric shock therapy to help me now.

And that was it. It was over. I'd fallen for the "new, new, new" labeling and it was too late.

Now I have an addiction.

There. I've said it... I'm totally addicted.
Here's how bad it is... I've stopped eating CHOCOLATE!
Who stops eating chocolate??? I LOVE chocolate. There are times I'd offer my first born for chocolate. Particularly the Lindt milk chocolate truffles.
I have some. Probably thirty or so... and I'm not touching them! Not the m&m's either. They just sit there in the jar... sulking... wondering why I've forsaken them. Why the late night rendezvous have stopped so suddenly.
I've read and heard about these sorts of addictions before - but I never thought it would happen to me. This is the sort of thing you never expect from a church going woman let alone a scrapbooker. But I confess now - I've been deeply involved in what the French would call a manage a trois, (that's "threesome" in English without the showy accents over the vowels...) with Benjamin and Jerald. You may know them as Ben and Jerry.
Yes - it's difficult to admit - but I'm in deep and it's only by admitting that I have a problem that I can begin to recover. So I'm going to try to back away... but not all at once.
This picture shows you a little of what's been going on the last three and a half weeks. By the way... the ones in back are empty...and this is only a drop in the bucket... 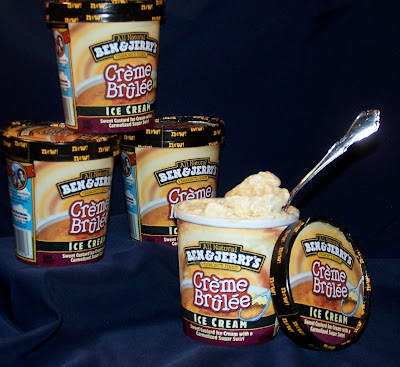 Take my advice - Resist! Don't even TRY it. Smooth custard ice cream so creamy and cold - perfectly soft if you put it near the door of your freezer... with the tiny bits of crisp, caramelized sugar, swirled expertly within. If you close your eyes you can taste the faintest bit of perfectly roasted marshmallow. But it's not worth it - because you can never go back - life is never the same again. You'll find yourself purchasing them two at a time and hiding them from your husband and children behind the frozen peas at home. You'll intend to stop - but before you know it you're past the halfway mark and headed for the bottom. Just over a half a day's calories later you yearning for more. For the longest time I thought that these were single serve containers... turns out there's four servings in there! Who knew?!

So don't. I've warned you - and it's for your own good. And it may cost you a long gym membership to recover...