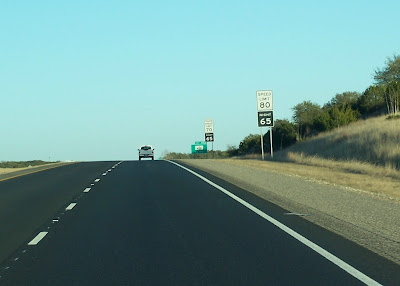 My local scrappers got together for a crop last Sunday. It had been a long time and we were anxious to get something accomplished. We met at a member's house about 30 miles up I-10 from me. I was excited to see the posted speed limit signs just outside my county to the north. There was a change made last year and I'd heard about it - but had never seen it in person. 80 miles per hour during the day (trucks 70) and still 65 at night due to all the deer in the area. I've heard it's the fastest speed limit in the US (not that most drivers don't do at least 80 or more in the lower posted areas as well...) So does this mean the average speed is now raised to 85 mph? How safe is THAT? Especially if the driver is trying to take photographs at the same time! (I did slow down - the truck ahead of me was one of about a dozen I saw the entire trip... most in my rear view mirror (wink, wink)
So, now - it's not only BIGGER in Texas - but it's faster too... It's this way almost all the way to the state line - due to the sad fact that it's an incredibly dull trip I suppose... not a lot of McRestroom's along the way... Yee Haw...
Posted by Sara at 2:49 PM