Tonight was a trip back in time - well... actually it wasn't... it was WAY before my time and Zachary's as well. But it was a trip none the less!

It was 50's theme night at Zachary's cotillion class. It took quite a lot of talking for me to convince him that new sneakers weren't necessary - but that dress shoes would be more to the traditional dress. In the end he looked quite good - and decidedly different than the other lads in attendance.
I served as chaperon again and I'm so glad - I always thoroughly enjoy myself watching the kids and they were particularly fun in their 50's costumes - especially the girls in their frilly slips and colorful poodle skirts.

Zachary won a prize this week - for his astounding Elvis impersonation! I was impressed myself... all the other boys just did the familiar "thank ya' - thank ya' very much..." but not Zack - oh no! Nope - he actually SANG a bit of Teddy Bear - and quite well I might add. And to further impress - later in the evening he was called on to help demonstrate the "slide" during the Lindy Hop instruction and he managed it very well indeed. I was a proud mama (and very glad we'd reviewed the slide in the driveway before we left home...) 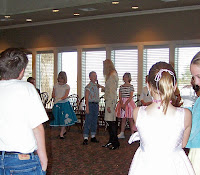 After the class he and I continued our date at Culver's for dinner and a treat. It was all well and good until he mentioned in passing that he wished kissing was allowed at cotillion... Seems he's developed a bit of a crush on Miranda - a FREQUENT dance partner (and pictured on the far right in the photo of girls above.) Thankfully he could see the wisdom in waiting to do the kissing stuff... since there really wasn't a "good" reason to be kissing a girl he's only really danced with on three Tuesday nights. Having a conversation beyond "let's run into the other couples" should be a prerequisite... 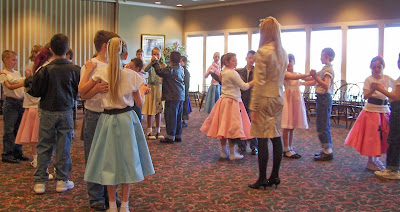 Oh... P.S. I've been such a frequent chaperon at cotillion I was asked to serve on the planning committee next year. Yay!
Posted by Sara at 8:56 PM

Email ThisBlogThis!Share to TwitterShare to FacebookShare to Pinterest
Labels: Zachary