The Brunch That Wasn’t

We had planned to host eight guests for Easter brunch. But alas, felt it best to cancel when our two boys were running fevers the night before.

Since I had made  two quiche, (it’s not quiches, is it?) the Friday before I decided to go for it and just set a pretty table anyway, snotty noses and fevers aside. Besides, my kids were feeling a little left out as I set up for my last party, saying I never do fancy tables for them (which I actually do every. single. holiday…whatever…) Imagine my surprise when my oldest said, “why are you getting all this stuff out? It’s just us.”

Teen-aged boys. The icing on the cupcake of motherhood. 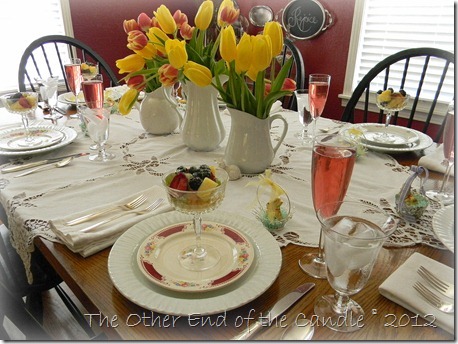 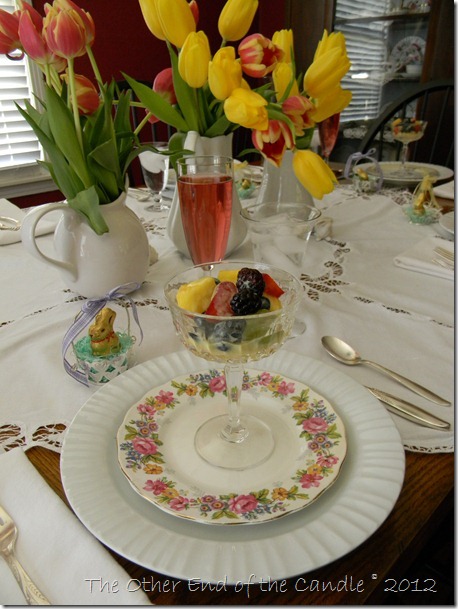 And anyway, I promised you recipes for my quiche and crust so I had to do a photo shoot for you. Is it just me, or does it feel like this is turning into a foodie blog…? I hope not. That’s not my intention, but I do like to eat – and cook things that are easy – especially if someone else is cleaning it up. (By the way, that didn’t happen either.)

Let’s get on to that crust recipe. 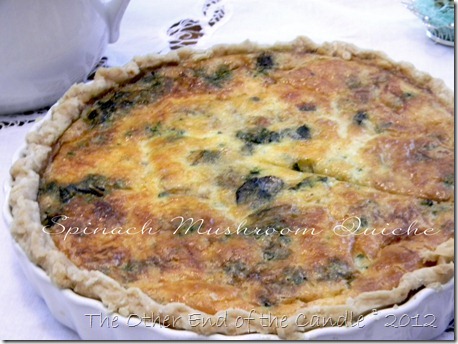 Now I have to tell you – This is about the third time I’ve made pie crust. I’ve been warming up to the idea for the last twenty some years. I did make a crust early in our marriage, and by early I mean probably in that first full week of wedded bliss – also the only time I’ve made a scratch lasagna (don’t judge).

This last summer I got a private crust lesson from two of my most favorite Aunts, both of whom happen to rock a pie crust – they can’t help it – they, like my mother, got the “amazing pie crust” gene from my Gramma.

Some of you have asked for some very specific instructions. Apparently, I’m not the only 20-something-years married woman out there that’s been buying frozen pie crusts…. NO MORE. This crust is flaky and tender and delish!

You need just four ingredients and a little water. 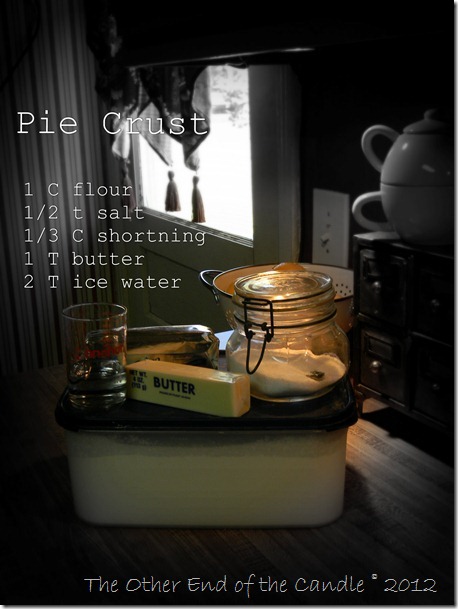 I tripled my crust recipe since my quiche recipe makes two quiche quiches egg, cheese and vegetable pies. Plus, I don’t use a traditional pie pan for my quiche, but a straight-sided tart pan which is a little wider. (They are also glazed stoneware tart pans – not sure what kind of difference that is making with how the crusts turn out… maybe I should make a pie in my glass pie plate and compare…)

Before you start (scoot in close now – this is the BIG secret to a fantastic crust…) put all of your ingredients in the freezer. Yes, the freezer. You want them very cold (that’s what my Aunts told me.) You could even chill your mixing bowl. 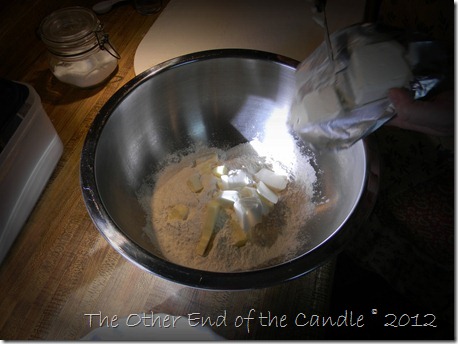 When your ingredients are good and cold, cut the shortening (I use regular Crisco) and butter (the real thing or the Smart Balance 50/50 blend) into pieces over your flour and salt. 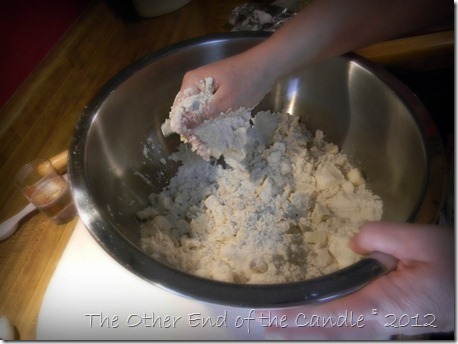 Using your hands, work the “fat” into the flour mix. Work quickly – you want it to stay cool – don’t let your hands warm it up. Some people like to use a pastry blender for this – you could if you want to, but I think it takes less time and effort with your hands. 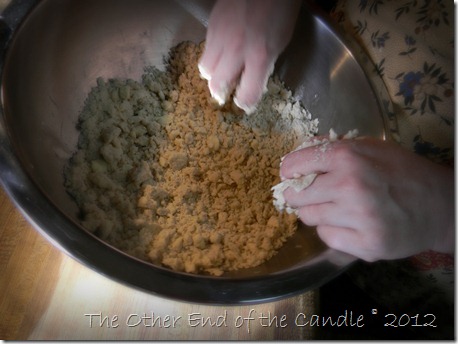 Work it until you have coarse crumbs. Those “chunks” are the shortening and butter – future “flakes” in your pie crust. 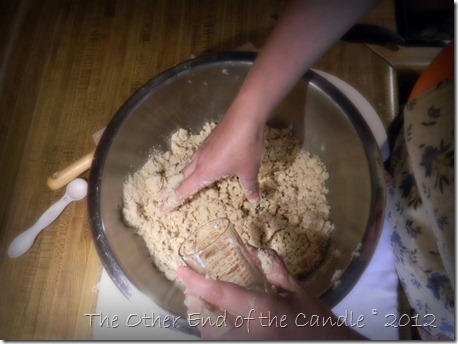 Next you’ll add just a little bit of iced water to get your ball of dough to form. 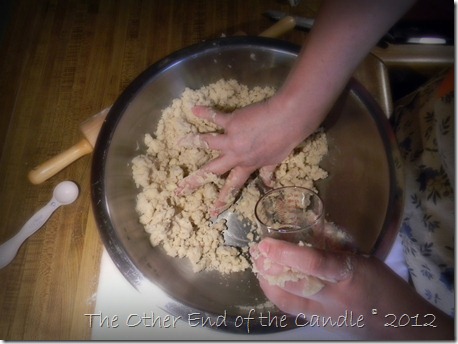 Flick your dough around, adding just a little water at a time, until it starts forming large clumps. 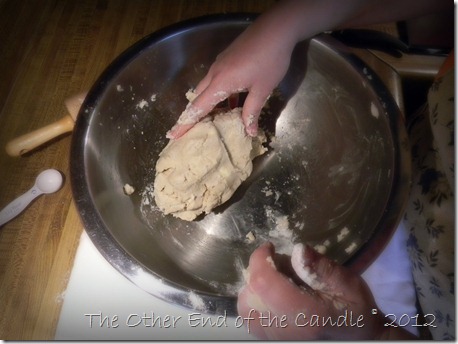 Quickly press into a ball – still not overworking your dough – you’ll make it tough.

Here’s another secret… I have a dough board. It’s a plastic board with a tight cotton cover. I also have a sock for my rolling pin, but he’s not wearing it here… I found a link where it’s sold online, but out of stock right now. You can contact the company, Wood Enterprises, at 1-800-456-0851. 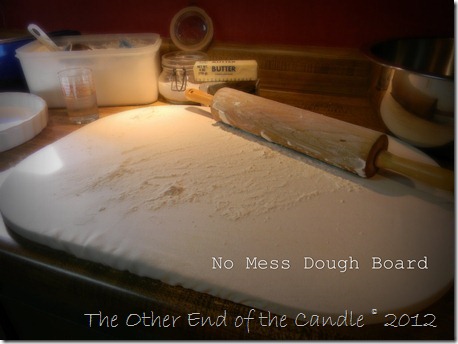 The dough board isn’t absolutely necessary by any means. In fact, I forgot that I even had it the first two times I made crust. You can do just fine on a clean counter-top dusted with flour. 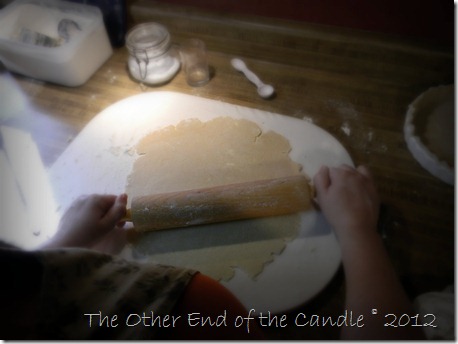 Roll your crust to about 1/4 inch thick. 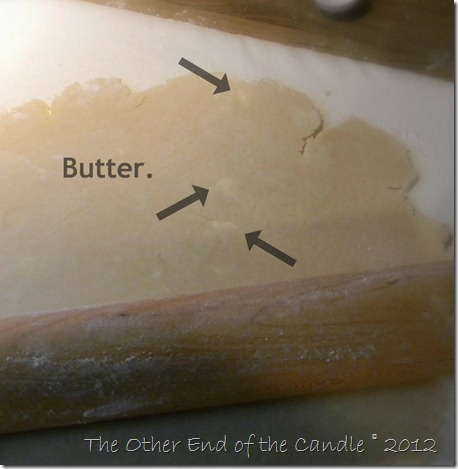 See the bits of butter? The butter is easy to see, but that mottled look where it’s a little white, is the Crisco. This is going to be a flaky crust!! 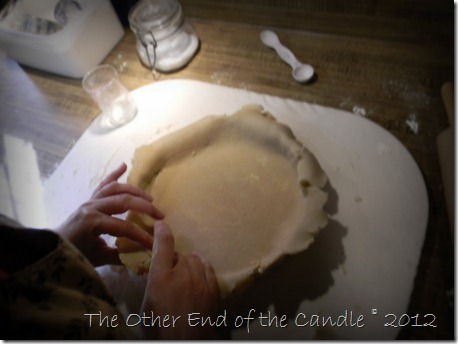 Trim the excess dough from the edges, repair any tears or cracks with a water dipped finger tip, turn it under and flute the edges. There are lots of different ways to flute – I just pinch between my thumb and first two fingers. 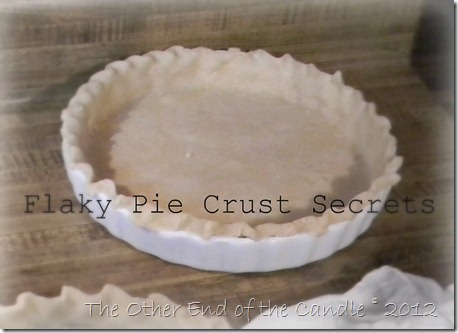 This has gotten pretty long – let’s save the quiche recipe for another day this week – stay tuned – I’m told it’s worth the wait.

Today I’m linking up to: