I truly love a good table centerpiece. Something beyond the standard vase of flowers and candles and really piques my interest. It gives me something pleasant to look at rather than lips smacking briefly to obstruct see-food... (I digress in the name of humor - I won't allow such things at my table - "potchen", as my Grampa Pop would have said, ain't allowed here. It's in the top three on my leg-long list of pet peeves...)
Back to table pretties... Each month I put a dinner together at church called "Women In Touch". It's meant to be an outreach as well as just a time for Christian women to have a night out to be waited on and fed spiritually as well as physically. It's probably my favorite job as Women's Ministry director for our church as it really feeds off the spiritual gift of hospitality. Every month requires an idea for a dinner and decor theme, plus the topic of discussion or the presentation. It's sometimes very challenging but in an enjoyable way. I've found that one of the best resources is the Better Homes and Garden's website - there are a TON of table decorating ideas there - complete with photographs and sometimes detailed instructions. Both the rectangular plate centerpiece and candle idea came from BHG this month. Both were super easy as well. 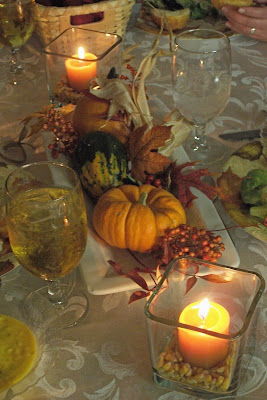 The pumpkins and gourds were purchased in a box at Costco for $4.99. There were enough in the box to make arrangements for three tables plus some little clusters on the serving tables. I just keep them in the fridge to make them last. I've had the rectangular serving dishes for about a year now - I got them at Wal-Mart for about $8 each. They have been VERY versatile I use them to serve vegetables for dipping, or cooked string beans or asparagus, or various candle centerpieces. At the left you can see how I used them last Christmas - just three different height pillar candles with some gold ribbon adhered around and various Christmas balls scattered around the candles. The glass candle cups with the Thanksgiving arrangement are also from Wal-Mart and less than $2 each, with a 4 inch pillar candle and some deer corn poured around the base of the candle.

There are also some "silk" fall leaves I found one year and I can't for the life of me remember where - but I'm so glad I bought two packs at the time - I use them a lot and they look so real. And if you look close you can see some bush clippings too - just some berries and fall-ish looking leaves from my yard.

shapes and probably a total of three gourds or pumpkins. Keep the texture interesting - there's some little bitty Indian corn in there too. Right above, there's another idea for a quick easy fall centerpiece. The little Indian figures I picked up at Hobby Lobby in the before Thanksgiving sale last year. I think they were around $4 each on sale. I just scattered some mini pumpkins and those silk leaved around them. I love to hollow out the mini pumpkins and put a candle down inside. All you do is slice the top off your pumpkin - careful that you go far enough to clear the bottom of the stem, but leave a nice little "lid". Then just scoop out the inside with a spoon until it's all smooth. You can keep these fresh too, just put some plastic wrap over the cut edges and refrigerate them. They'll keep for a couple of weeks if you take care of them and watch for mildew.

I don't have a photo of the ones I made, but another quick favorite is to hollow out a pie pumpkin and stuff it with oasis foam - the kind of florist foam that holds water and has a flower preservative in it. Just pick up a bunch of fall flowers at the grocery store and build a mini arrangement in it. Start with the center flower being a little taller and cut the stems shorter to keep it round-ish. Use a lot of different colors and don't let it get too tall or top heavy. If you get a kabob skewer you can hang the "lid" from the side too - cut it shorter and just poke it down in your foam and hang the top edge of your pumpkin lid from it.

About those candle cups in the first photo... You can buy big bags of deer corn here in Texas and probably all over the Midwest too - it's just $7.50 for 50 pounds at WM - but I didn't want 50 pounds of deer corn - I seriously don't want them dropping their black jelly beans in my yard... So I bought a much smaller bag of squirrel feed instead. Most people don't want them in their yard either - but I don't have to feed them - and I've got a lot less to throw out. What I think I'll probably do it let the kids take some to the park now and then and drop it there :0)

Anywho... if you decided to get the squirrel feed - someone will need to sift through and pick out just the corn and leave the sunflower seeds and peanuts behind. It's a dirty job - but in the name of pretty centerpieces it must be done. Corn is the perfect centerpiece accent for Thanksgiving - you never hear about the Indians (Native Americans for the PC folks...) sharing their peanuts and sunflower seeds with the Pilgrims, now do you? Hire a kid - it's good practice for some day when they need to sort out all your pills for your pill box when you're old and blind...