Way To Start A Year

There have certainly been worse starts - but this seems to be right up there for me...

There is something unexplainable that happens to a woman's brain with each child she has. Actually - it's really not all that unexplainable - my theory is that the little buggers STEAL from you.

Brain cells - I'm talking about brain cells. Try to keep up and guess what I'm thinking, OK? They're are either stealing the brain cells from us, or they're being replaced with fat cells! I don't believe I was always this dumb - it's those little people - they sucked the 'smart' right outta me! This is why you're advised to go to college BEFORE you have children.

Last night I did something I'd rail on my ten year old for at LEAST until the next century begins...

I washed my brand new MP3 player that Santa put in my stocking.

I thought I'd do just one more thing before leaving for the gym and move the clothes from the washer to the dryer. Imagine my shock and horror when I pulled out a dark wad of cold wet clothes and realized that my hot pink MP3 earphones were wrapped around them like packing string.

There wasn't even a kid to blame it all on - it had been me that grabbed those exercise pants and throw them at the last second into the wash. It had been ME that left that sweet little device in the pocket of those pants.

It was so purdy - cute little white one that even played video clips and showed photos. I'm taking the word of the instruction manual here - never actually used those features - I'd only used it three, (count them - one, two, THREE,) times at the gym - and then only used the FM radio to listen to Fox News while I was on the elliptical machine. What a sad, short, little life.
So I cried out to my techie husband to FIX IT, but he didn't seem to have a lot of answers... So he baked it. Actually put the thing in the oven on the "warm" setting. You must understand the "warm" on the oven is really like a spring day here in Texas and certainly not as hot as the interior of our car in the summer.

I also prayed over it. It wasn't a very expensive MP3 player - I happen to know that Santa got it on a good "Black Friday" sale at 5 a.m. and there was a $20 rebate coming too - but still, there's not money in the budget to replace it right now and how on earth will I know who to vote for in November if I don't listen to Fox News at the gym every week until then???

I got home late from the gym last night and finally, at about 1 a.m., I went in to put the poor, dead (yet warm) little MP3 on to charge while I took a hot shower before falling into bed.

When I got out of the shower you'll never guess what I discovered - the little bugger actually powered up!!! I couldn't believe it! Praise the Lord - it was a laundering miracle!

I turned it off quickly and said, "no way Lord... no way! If you saved this little MP3 player I'll have to tell everyone! And even write to the Delstar company!" I may not be able to understand all of the Engrish in the operations manual but that little sucker sure is tough! 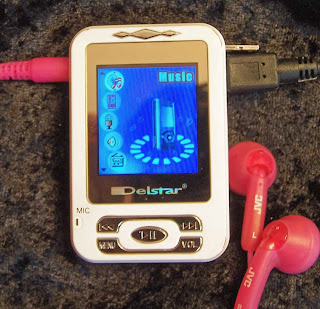 Well - the ending isn't entirely happy - it does power up AND the JVC jelly soft stereo headphones (in an adorable pink) still work as well, but it only works when it's plugged into the charge.


BUT - this just might be something that the marvelous Delstar company could fix for me. Sure can't hurt to ask.

Just wanted to share that little New Year miracle with you! Now, I realize with sick children and dying parents, war in the world and scrapbook hall-of-fame winners being dethroned that this just is NOT a big deal - but our Heavenly Father wants to give us the "desires of our hearts" and we are of more importance to Him than we even give ourselves. These two verses in Luke 12 don't necessarily apply to my little MP3 miracle - but I wanted to share them anyhow:

6 “What is the price of five sparrows—two copper coins? Yet God does not forget a single one of them. 7 And the very hairs on your head are all numbered. So don’t be afraid; you are more valuable to God than a whole flock of sparrows.
8 “I tell you the truth, everyone who acknowledges me publicly here on earth, the Son of Man will also acknowledge in the presence of God’s angels.

How awesome to be asknowledged in presence of God's angels by Jesus Himself! Go get yourself acknowledged too!

UPDATE: My little Delstar MP3 player that I washed in warm with a cold rinse is not only static free - BUT TOTALLY WORKS now... even OFF the power cord! It either needed a longer charge or God just wasn't done with it yet - much like me... Praise God for His excellent greatness!
Posted by Sara at 11:48 AM

Email ThisBlogThis!Share to TwitterShare to FacebookShare to Pinterest
Labels: Testimony