I'm Dreaming of a White Easter

You know - I've been spring cleaning for the last week and a half. I've taken more loads to the local charity that I can count. I've been through all my linens, clothes, husbands clothes and kids clothes, plastic storage containers, CD's, doo dads and what's-its. I've purged until my gut hurts. I've vacuumed all the baseboards, cleaned all the blinds, moved all the furniture and vacuumed under that. I've washed and put away all the winter clothes, comforters and electric blankets and I'm READY for spring!
Enter cold front.
Whoever heard of sleet and snow the day before Easter??? My kids went to church Saturday in shorts and winter coats!
The boys' were let in on the "secret" this year. We were shopping in Target and I was just tired of trying to be clever and covert - so I told them. Zack just said, "I know that mom... just like Santa." And Jacob said, "NO - it's NOT like Santa, because Santa is REAL!"
I stayed up way to late (read: early) but had fun watching movies and doing up Easter baskets for the kids and my secret sister. Oh... an one for me and my babies Daddy (no eggs - just pure decadent chocolate.) I planned a treasure hunt for the kids instead of the traditional egg hunt. It was just too cold to be outside so I hid clues in the house. Because we weren't doing an egg hunt we didn't even dye eggs! Can you imagine??? 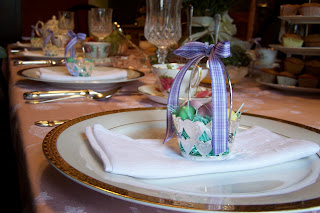 All the grandparents came over for Easter brunch. I really enjoyed setting the table. I used my great gramma's Irish linen napkins and my antique tea cups with some silver baskets I found in the wedding department at Wal-Mart. I added a little of my scrapbooking ribbon and called it good.

The flowers were a combination of bouquets from Costco and Wal-Mart. I was rather irritated the two large hydrangea wilted right after I got them home from Costco. The other flowers held up just fine - so I added a few more WM flowers to fill out the vase.

We ate like kings! Two kinds of quiche - Lorraine and Crustless Carrot (thanks to an old recipe from my sis in law Shari), Carrot muffins, flower shaped scones with mock Devonshire cream, lemon curd and raspberry preserves, all kinds of fresh fruit and home(mom)made short cakes, and of course a variety of teas with cream, sugar and lemon. There was so much food we had to serve some from the buffet in the kitchen - the table simply wouldn't hold it!

After brunch the kids started hunting for their baskets. They'd been patient far too long!

Here are the clues I used:

To find your basket from the Easter Bunny
You’ll follow clues that are sometimes funny.
Work as a team – all together
Decide where to go – then look for your treasure.
Try not to run, leave no one behind,
It’s Easter booty you’re trying to find.
The clues are hidden in plastic eggs
First go look where mom props her legs.

That took some thinking, but it’s long ‘til you’re through
Where you keep the glasses is clue number two.

You’re getting good – working as a team
Clue number three is by the hair cream.

And now a riddle for the fifth one:
They usually need water and lots of sun
But this one’s not real though the leaves are still green
Look down below and the clue will be seen.

Five clues you have found in time that is rare
For clue number six look by the gold pear.

You’re getting close, but there’s still a few more
For clue number seven look behind a door.
It’s usually open near what looks kind of like rocks
For further help seek near the blocks.

That was fast – you’re almost there!
For clue number nine
Check the willow chair.

This is it – the very last clue
It’s been so fun watching you.
You’ve worked really hard and run to and fro
You’ve worked up a sweat that’s starting to show.
If you had time to get fresh as a flower
Where would you go? Perhaps in your shower?
That’s where you should look to find your booty
But first thank your mom – that’s your duty.

They had a ball running all over the house and we enjoyed watching them while we kept warm by the fire.

I was so tired in the afternoon - but I still did my traditional viewing of Steel Magnolias. Can't let the season pass without watching it. It's one of my all time favorites full of great lines and zingers.

Now for the big news...
On the Monday after I had ALL the Easter decorations put away and ready to go back to the shed. (and there's only one more box of Christmas stuff that needs to go out...)