Step into my time machine, (which looks nothing like a stainless steel sports car…) and head back to 1974 with me.

My memories are scant at that point – my earliest memory is of my third birthday party, after that I have a recollection of my first visit to Disney World early in 1972. After that, it’s a misty blur up until kindergarten EXCEPT for trips to the mall to visit my Aunt, working at the Orange Julius stand. This is probably what catapulted her to most-favored-aunt status at the time. 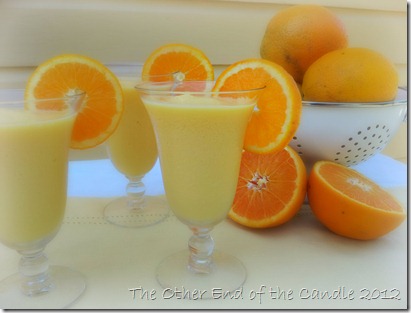 If you’ve never had an Orange Julius you need to make the effort. I haven’t seen an Orange Julius stand around since I don’t know when, but I’ve discovered that they were purchased by Dairy Queen back in 1987. Now you’ll find combo stores or “Treat Centers”. Further investigation at their website has shown me that there is one within about an hour’s drive from me. Next time we’re in the Big City I think we’ll track them down and compare the original with my made-up recipe from home. I don’t have access to the “magic powder” that they use at Julius, that’s what the vanilla pudding mix is for… Whiz the juice concentrate, milk, simple syrup and pudding mix in the blender. Add the crushed ice and blend until smooth. This yields 3 good sized servings.

Grab a straw and brace yourself for a brain freeze because it’s so yummy you’ll drink it too fast. 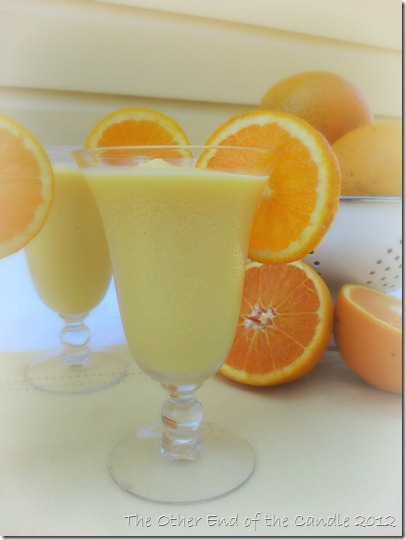 *Simple syrup is easy, if you haven’t made it before. In a small saucepan, combine 1 cup water and 2 cups granulated sugar. Bring to a boil, stir constantly and dissolve the sugar. Remove it from the heat and cool completely. Pour into a jar and store in the fridge. 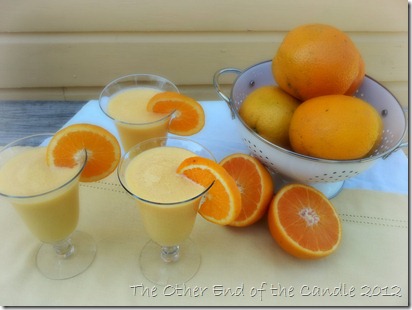 This isn’t quite as frothy and delish as I remember the original to be, but it’s a nice knock-off. Let me know what you think.
Posted by Sara at 4:36 PM