My Christmas Gift To You

I’m probably going to get in trouble with my kids for doing this, but it’s really not often that they read my blog unless it’s over my shoulder. Since they’re in bed right now I feel safe.

This gift goes back 21 and a half years to my first week as a married woman. That’s the first time I made a little two-potato pot of soup.

For the next 15 or so years I tweaked and adjusted (and increased) my recipe until I arrived at the recipe I’m using today. Somewhere along the way it became a favorite on Friday nights and most especially our family tradition to serve for dinner on Christmas Eve.

Over the years I’ve been asked to share it but I had these lingering dreams of someday selling the recipe to a restaurant, opening my own vegetarian bistro or at the very least, writing a cookbook.

Well, I’m busy. And lazy. There will be no bistros or cookbooks. It’s taking a large amount of effort to even write this up for the blog. I'm currently getting "403 - forbidden" errors when I try to publish this. But I’ve still decided to go ahead and share. (Please don’t tell my kids I shared our most sought after family secret…) 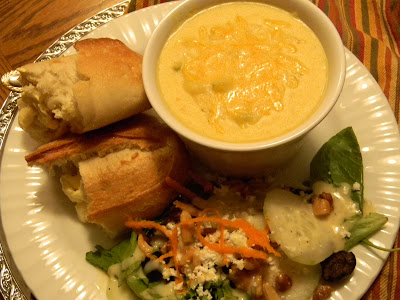 Sara’s Potato Soup
(AKA – Coronary in a Pot)
In a large stock pot sauté:

After the above has sautéed nicely add approximately 7 pounds (a bag and a half) of yellow gold potatoes, peeled and cut into 1 1/2 inch cubes. You can add variety here by only peeling half of the potatoes and washing the other half. OR if you have baked potatoes leftover it’s nice to add them. I don’t peel the baked ones either. Just use a nice quality cooking potato for smoothness.

Immediately pour in:
Be sure that potatoes are nearly covered in broth and let cook down uncovered at a gentle boil. It will get very thick with no clear liquid and the potatoes will break down except for some large chunks. Stir frequently to avoid scorching the bottom. This takes about 30-45 minutes. This is a vegetarian recipe – if you don’t want vegetarian use chicken broth and omit the chicken style seasoning.

After it’s all cooked down and thickened up, add:
Don’t let it boil now – just get it all stirred in – then use a stick blender to smooth it out a bit. I like to leave a lot of lumps.

Serve hot with a garnish of grated cheese or sour cream dollop and a nice salad and some great bread to scrape the bowl.

It will be very thick the next day. It’s best warmed slowly on the stove adding milk to thin it to the desired consistency.

You can reduce the calories and fat by using low fat or 50/50 butter and sour cream and using milk rather than heavy cream or half-n-half and reducing the amount of cheese. But really… how often are you going to make this? Leave it full flavored.

There you have it. No ingredients left out, no secrets saved, and you don’t have to get me anything.

Make up a pot for your family this Christmas.

I’m linking up to: