Lots going on around here lately - which makes it difficult to keep up with the ol' blogg-a-roo...
I'll try to do a quick little update... (I said "try"... don't hold yer breath...)
The morning after Zack broke his wrist I picked up my favorite sis-in-law and her boys at the airport. The kids have been enjoying each other so much. We sent them off to VBS twice last week - morning and evening! It was nice for this homeschooling mom to get a little break and "piece of quiet" in there.
Here's a timeline for the broken wrist:
Tuesday he broke it and got his splint on - they scheduled him for an exam and cast with the doc the following Monday.
He was having quite a bit of pain with it and looping out on the Tylenol 3 they gave him - the codeine was giving him bad dreams about diamond ping pong balls and upsetting his stomach. With his cousins added to the mix he was getting bumped more often and the cats and dog didn't seem to realize that bumping the arm was a bad thing...
I called the doc and asked them if we could move the appointment from Monday to Friday, but the said he wouldn't be in on Friday, but they could see him Thursday.
Early Thursday morning the office called and asked if Zack had eaten anything yet. This clued me in to the fact that this was going to be a pretty expensive visit...
When we got to the office they took him right back but didn't even look at the wrist - just started the paperwork to send him across the street to the outpatient surgery center. 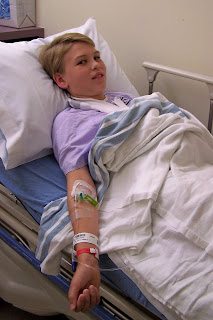 By 11:30 they had him in his little lavender hospital gown, split up the back. I told him I figured they were purple so that nobody would steal them... They started a saline IV on him and he immediately started to "hallucinate"... (oh brother...) We talked him down from his "high" and let him know that likely all it would do is make him pee more. Oh - "we" is my dad and me. Grampa came over to keep us company. They marked the splinted arm with a "yes" to be sure that they would fix the right one... 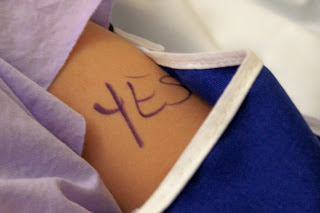 By the time the nurse anesthetist came in to give him the *real* drugs we had him giggling.
At about 12:20 I went looking for a bathroom and decided to make a quick stop at the desk to see if they knew how he was doing. Just then the nurse called us back to the recovery room. She commented all the way about what a great kid he was and how he was waking up so happy. Obviously someone had switched the charts somewhere...
He was OK at first but then started asking for morphine for the pain and then started in with some really nutball hallucinations - crying that the hippos were chasing him and were going to eat him.
His doc came by and said they had done a closed reduction (no surgery, just pulling yanking it into place) and that it had slipped back into place easily, which meant it could slip back out of place easily as well. They sent him home in a splint that was stronger than the original - not the pink cast that he expected. (Yes - pink... I'm told it's all the rage for boys his age...) They scheduled him for a follow-up visit the following Thursday.
On Tuesday evening when Aunt Shari picked the kids up from VBS she caught Zack riding a skateboard in his WET splint - and then watched him fall off it and onto his splinted arm. Apparently he'd irritated a girl and she'd dumped a bottle of water on him. I called the doc's office Wednesday morning and they worked us in that afternoon for the real cast. (The PINK one...)
This cast lasted for a week until they had him back to check on the swelling - apparently it shrank a little and the cast was a little loose - so they cut that one off and put on another one. And of course they had to take another x-ray... That brought us up to today.
We told the doc repeatedly that we're headed out of town for an extended vacation, but he never really seemed to hear me on that one... So today they finally gave me a copy of his x-ray and his SOAPs for the doc we'll find in Missouri (or "Misery" if you're a nearly 11 year old wanting to swim your summer away at the lake...)
I'm trying not to lose my head over the dirt showing up after 5 minutes on the pink casts... At least they're changing them frequently...
Posted by Sara at 2:11 AM

Email ThisBlogThis!Share to TwitterShare to FacebookShare to Pinterest
Labels: Zachary