We’ve just finished helping out with a “Flat Stanley” project. If you haven’t heard of Flat Stanley or the books by Jeff Brown, check out his back story here.

We received our little flat guy in the mail and started planning where we could take him. Unfortunately, he didn’t receive an official name from the student that sent him, so we just called him “Me”. And he was flat… so it was Flat Me. I know… it’s terribly cleaver. (Whoops – clever. Don’t tell anyone I homeschool…)

At first it was tough – we’ve been blessed with lots of gray and rainy days lately – and that’s not the best weather for taking a guest out sightseeing. But finally the weather lifted and we hit the road

Yes, I said “guest”. The truth of the matter is we may have treated this laminated piece of paper cut out like a gingerbread-man and hurriedly colored with crayons better than we treat some of our house guests.

We hit the most popular Texas landmark first – and during the 176th anniversary of the famous battle that was fought there. 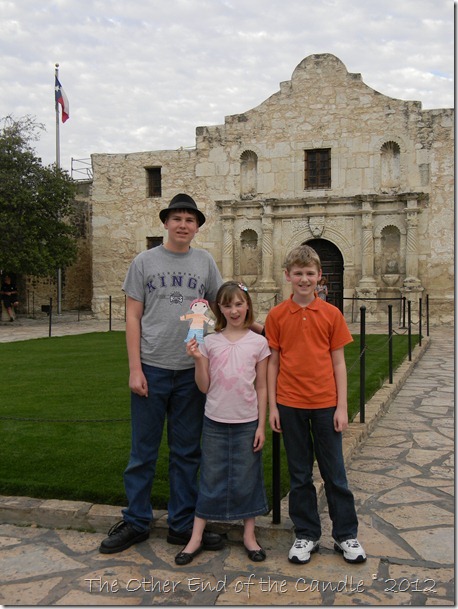 Before you think too poorly of me for only taking my kids to see famous landmarks when we’re hauling a piece of paper with us, let me assure you they’ve been here before. So it was more like an adventure,really, when daddy slowed the van down (in the “busses only” lane no less) and we did a “tuck and roll” out while he circled the block. “GO, GO, GO!!!” We may as well have been jumping out of an airplane. It was exhilarating, I tell you! And we avoided having to pay for parking!!

While we were jogging back to the corner I coached the kids on how to dive into a moving vehicle and  informed my husband via walkie-talkie (or cell phone…) that we were changing the dinner plan.

Instead of pizza at Costco we opted for dinner on the Riverwalk. When you’re a piece of paper visiting San Antonio you’ve gotta see the Riverwalk.It’s basically a sidewalk…around the river… 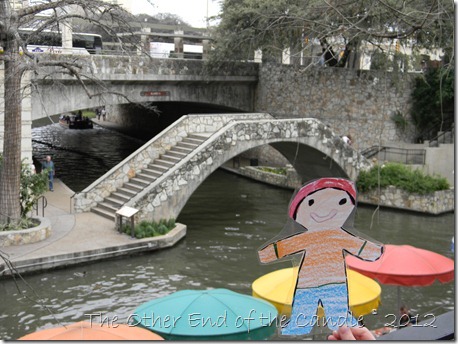 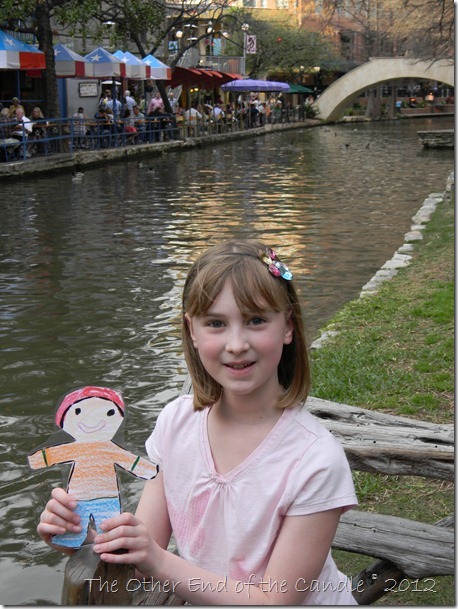 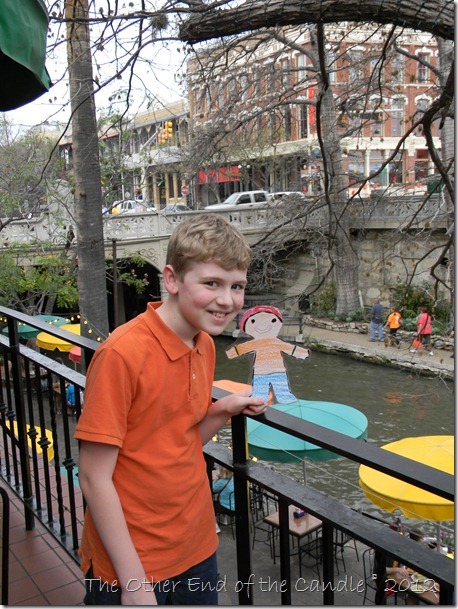 You can see the colorful umbrella tables for Casa Rio – the first business on the Riverwalk back in 1946. Instead of eating here we opted for a more expensive and lower quality meal with a faux ambiance. 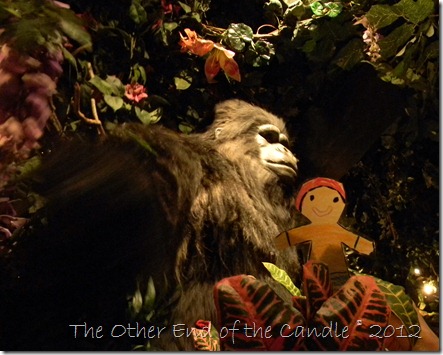 Welcome to the Rainforest Café. 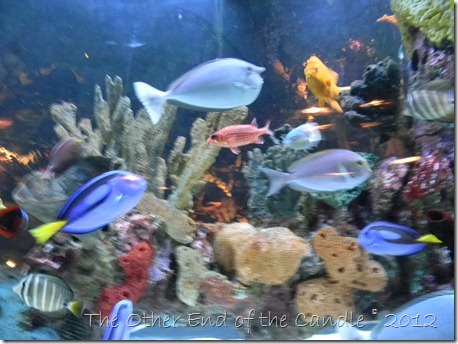 Flat Me is a real daredevil… 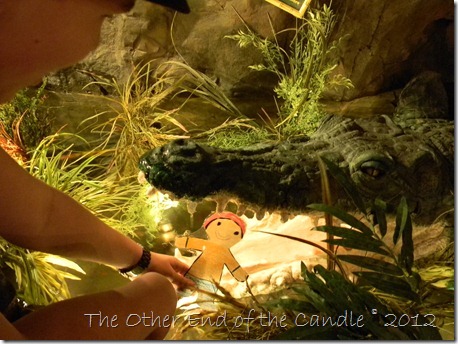 Fear not – no humans or paper figures were harmed while posing for these photos.

We showed Me the area we live in – The Hill Country. 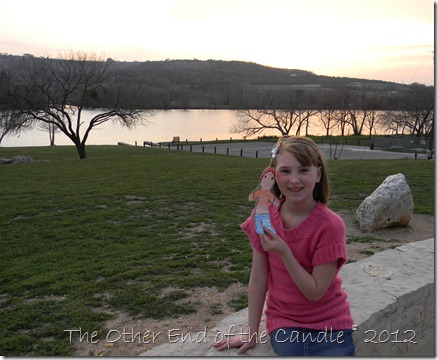 Later in the week we took Flat me to LBJ (as in Lyndon B. Johnson the 36th President of the United States) Ranch. 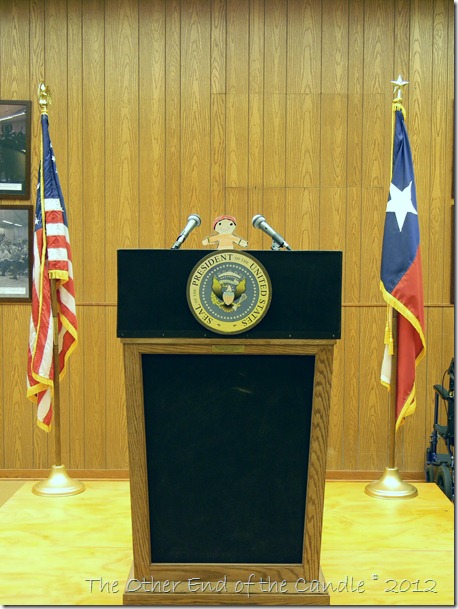 If you haven’t yet been to the presidential primary election in your state you might want to write “Me” in the blank on your ballot. I think Me would do very well against the current candidates.

The LBJ Ranch State Park is the site of Johnson’s birth, 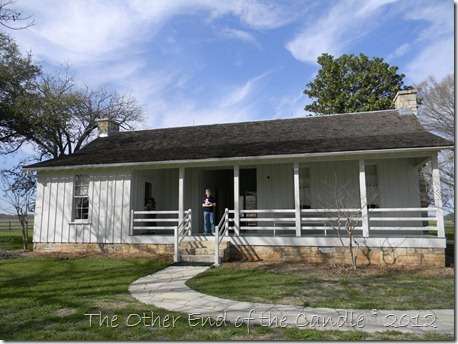 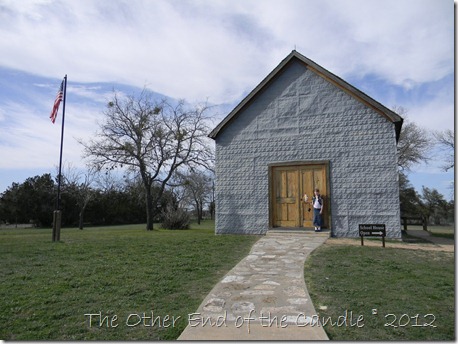 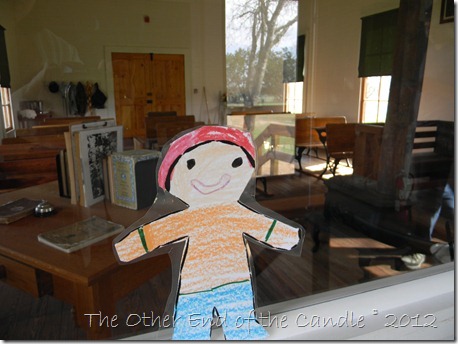 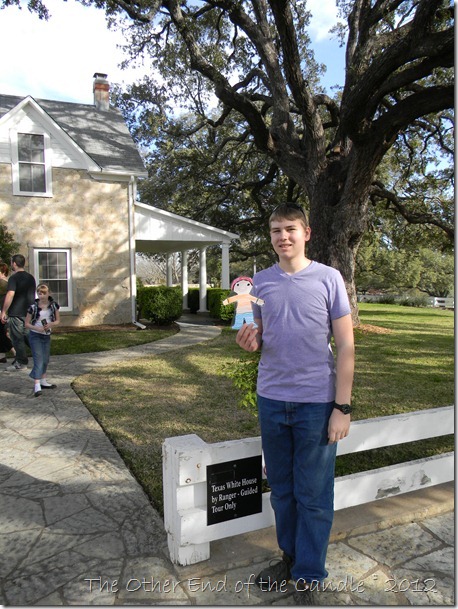 I’d show you the inside, but cameras weren’t allowed.

We intended to get Flat Me to the state capitol as well but it was so darn interesting at the LBJ Ranch that we ended up staying all afternoon.

With any luck, we’ll receive another piece of paper shaped like a giant cookie and get the kids over to the capitol for a tour sometime soon. It would be just too weird to take them for no reason at all.

So if you’re approached by a young student and asked to participate in a Flat Stanley project, you should do it. Stanley loves to go out to dinner and would probably love a nice weekend away at a Bed and Breakfast or luxury boutique hotel, maybe even take in a nice opera or off-Broadway production. Just don’t expect him to pick up the tab. I’m thinking if we get the chance again we’ll take our Flat Stanley/Me on a European tour.

I'm linking up to the