When we moved to Texas nearly four years ago I noticed something about the couples "our age" at our new church... nearly all of us (all four couples of us) had birthdays in September or October - except for my babie's daddy with his July birthday. That was a pretty strange coincidence and I've wanted to commemorate it ever since.
This year, in honor of at least two of us turning 40, I decided to have a BirthdayS party. I invited the other three couples from church and one other couple that attended with us for awhile, but then moved closer to "the big city" and started attending there. There were going to be ten of us adults celebrating our aging together with some fun games, a gift exchange (or fight...however you choose to look at it) and lots and lots of cake.
Well things happen, and one of the couples had to cancel due to their oldest having some outpatient surgery, and I suppose that crossed wires for another couple that figured we'd just cancel since we'd be one couple short. A third couple I never did hear back from (look for an educational post in the near future on the importance of the "R" part of the RSVP...) but our friends that moved near "the big city" were still coming - so we determined to have fun anyway and have to share less cake!
Rewind 11 months.
I've been giving my darling husband (note he's not just my babie's daddy here...) periodic updates as to the eminent arrival of the 40th anniversary of the day of my birth. I've been doing this ever so conveniently every couple of weeks since the 39th anniversary of the day of my birth. I'm nothing if not considerate... He knows that my birthday ranks up there with Christmas as holidays go - at least in my book - and I wanted him to have plenty of stress free time to rent a hall, have the invitations printed, get the limo booked or flowers shipped in so that he could enjoy the festivities (and therefore the rest of our married days) along with me.
Well he's nothing if not simple. And I mean that in the most loving way - if there's a simple way to do things that's the way he'll take - whether that means grabbing a close dish towel to wipe the floor instead of a paper towel that's several feet away, washing the darks and lights together, or wrapping all the presents in one box to save paper and tape. (These are merely examples...)
Fast forward to our party on the verge of flopping. 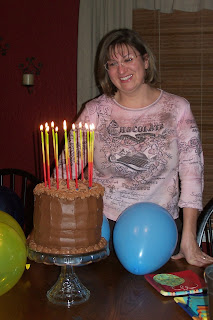 Dear hubby sees this as the perfect opportunity to have me bake my cake and blow out the candles too. So about a week or so before our party, he calls on the assistance of my "perfect friend" to help him spread the word that the focus is being redirected from 10 individual birthdays down to just one... Mine.
My sweet hubby kept all this information from me and let me believe that only one couple was coming. I'm flitting around the kitchen pulling stuff in and out of the oven and I look up and see two more couples in my kitchen doorway holding trays of appetizers and gift bags! 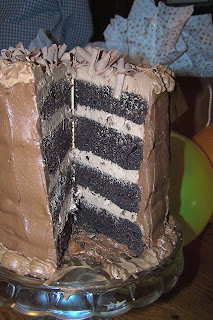 It was a complete surprise and we had such a fun evening. The only challenge of the evening was trying to figure out how to get the cake cut and onto the dessert plates that were about six inches too short...

After a yummy barrage of appetizers, four flavors of ice cream and tall cake, we did a gift exchange game and then played a round of boys against girls Cranium. DH never enjoys "boys against girls" because his team never wins... until last night. The boys had the victory - those homeschooling dads are quite savvy. Personally - I felt it would have been more fitting to let the (ten days from her) birthday girl be on the winning team... 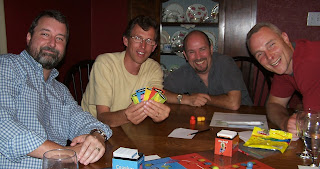 And so the birthday festivities have started. Bring it on - I can take it. I'm not afraid of the big 4-oh in the least - I embrace it and welcome it. If age is all in your mind then adolescence must be just around the corner!