Just a quick share of my boy - He makes me so proud most of the time. He just finished his first "performance" in a Shakespeare play - A Midsummer Night's Dream. He had the part of Demetrius. Even when he lay down at the beginning of his scene (he was asleep in the forest before the potion was put on his eyes...) he was careful not to let the audience see up his "dress". I don't have a lot of photos to share. Instead I took video tape so Dad could watch it later. 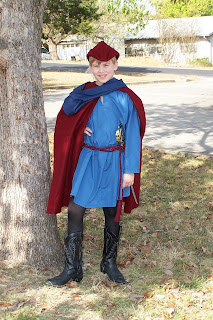 The performance was very abbreviated - just a short section that had all of the actors in it - as part of the "sharing time" at the conclusion of our Homeschool Co-Op classes. He had nine weeks in the class studying the play, time period, and general writings of Shakespeare. He really enjoyed it. It seems like he's always had a bit of an affinity for Shakespeare - a couple of years ago he got up at about 1 a.m., so I thought I'd bore him back to sleep with a movie - Much Ado About Nothing... Nope - he stayed awake for ALL of it and followed the whole story!
I've been so busy teaching a class myself that I waited until the night before to finally sew his costume together. I decided to not try to take a nap before the last class since it was 6 a.m. when I finished it (the pattern said 2 hours!) It was just a "Robin Hood" costume, but we changed the colors up a bit and added a pirate sword from Disney World and the cowboy boots. I think the boots totally make the outfit... Don't you?
Posted by Sara at 3:45 PM