There's A New Sheriff in Town

I've heard about this place - but this is the first time I've actually BEEN here.
I guess maybe I was having a bad day last Friday - one of those "spin your wheels" kind of days where no matter how much you do it seems like nothing is getting done! The kids were not being cooperative (read: not doing what I wanted them to do at a speed that satisfied me) and I reached the proverbial boiling point, or took that last straw on my camel back and I'd simply had enough.

I try to be very careful about the threats I make - knowing full well that if I don't follow through and make good on them I've lost all credibility with my kids. But there are times (on occasion) that I speak without actually thinking about how the consequence will effect ME in the end.

This was one of those times.

Have you ever almost been able to see your words leaving your mouth like the smoke rings from that bong toting caterpillar in the Alice In Wonderland movie? This is what was happening to me - and just like the smoke rings, I couldn't snatch them back. I heard myself saying, "if you can't take care of your property I'll remove it so that you don't have to worry over it anymore - I'll strip this room down so fast you'll think you're in prison!"
And the reply I got was, "So... Go ahead - I don't care."
Grrrrrrr..... I hate it when I give myself more work, but the Dr. Phil in me had been awakened.

It had to be done - so I started with having Zachary assist in carrying out his own punishment. We began with him stripping the decidedly male patterned navy, green and maroon plaid sheets from his bed and replacing them with a lovely peach flower motif. Getting the ruffle in the right spot proved to be the most difficult aspect of the task. While he finished remaking his bed I grabbed a box and emptied his book shelf, bedside table, hat rack and closet rod. Even the blocks spelling his name and his baby pictures were removed. His underwear drawer was emptied except for one extra pair of tightie whities and a pair of socks. His favorite camo clothing was replaced with one of my hot pink T-shirts and a pair of sweat pants.

The only books we left for him were the ones that Jacob likes to read and his Bible and lesson quarterly. (We were hoping for some sort of conversion experience here...)

The menu for dinner also changed. Now instead of Eggplant Parmesan he was having bread with peanut butter, raw broccoli, an apple and a glass of milk. (I won't be needing any comments about how he got the better end of the deal there...) 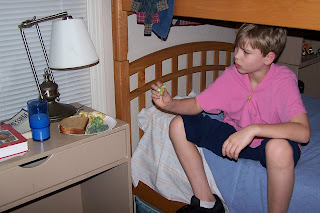 Initially, there was wailing and gnashing of teeth, but then things settled down... improved even, when he realized mom was really serious. After the other kids had gone to bed he came to me to talk about some things that had been troubling his heart and I think he actually listened. In fact, I KNOW he did because he took my advice and applied it (with positive results!) earlier this week. Go me!

I let up a bit and didn't make him wear the pink T-shirt to church, but he didn't get to wear what he wanted. Instead of his blue blazer, dress shirt and tie and black cowboy boots, he wore what he calls his nerd outfit - the polo shirt with coordinating sweater vest and his black sneakers. I couldn't help but beam when the head deacon asked if Zachary could assist in taking up the offering. He'd already asked me if he could sit in the mother's room where nobody would see him :0)

Saturday night and Sunday weren't easy with him basically being on bed arrest, but on the other hand, he was doing a lot of reading.

Things are easing up a bit - but he's still sans his property and clothes are doled out one outfit at a time (my choice). And the best part is, now when I ask him to do something, and he starts with the whining, I just tilt my head and wrinkle my brow and I hear, "never mind - I'll just do what you said mom."

I'm also benefiting from the trickle down effect it's having on the other two.

The biggest drawback is that I was so distracted as I was dealing with Zachary that I completely missed Michaela climbing up in my bathroom cabinet, getting down my haircutting supplies and whacking a big chunk out of her bangs - three weeks before she's a flower girl again...