Blessing on the babies AND the mama's! 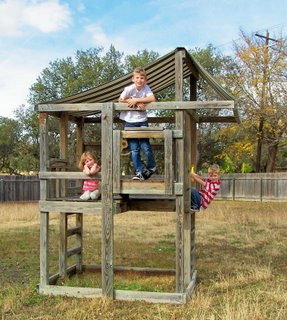 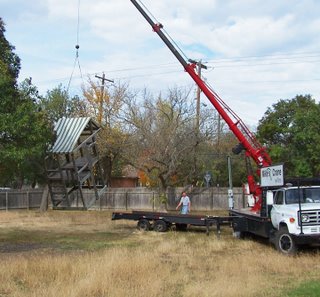 He's done it again... Blessed us more than we deserve...
I sit on the school board at our church's private two-room school and we're in the process of bringing the playground up to code. About two weeks ago I asked the principal what plans we were making for the old equipment - thinking we could buy it from the school. Well... she said it belongs to the Adrian W. family at the church and they wanted it back after the school was done with it. Oh well... I tried.
Well yesterday Adrian called and said, "did I hear that you were interested in the old play equipment?" I said that we sure were and asked him how much they wanted for it. He said, "you can have it... just go get it today!"
We called in a solid from another friend at church, Mike S. It just so happens that Mike owns a crane... isn't THAT handy?! He brought it over today and dropped it in the yard with the precision of a Golden Knight paratrooper! Now we owe Mike a solid - even though we paid him with about 40 of the worlds best homemade chocolate chip cookies ;o)
We, (and by "we" I mean Daddy and Grampa...) still have some putting together to do - there's a bar for swings and a big sand box also. We'll finally have a place to hang the horse tire swing they got for Christmas LAST year!
God is good!
Posted by Sara at 5:03 PM