Today I ask you to indulge me. This is a long one…

It’s already been a month since my Gramma, my last grandparent, passed to her rest. She would have been 85 at the end of this month – that’s a “ripe old age” by most standards. 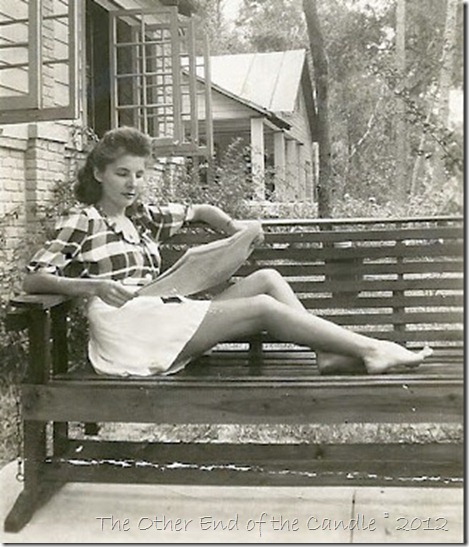 A month ago I was scrambling and making plans to attend her funeral in Kansas City. Part of my planning included getting my thoughts and memories down on paper so that if the opportunity arose, I could share them, or more likely, pass the paper off to my husband to read because I would be unable to. 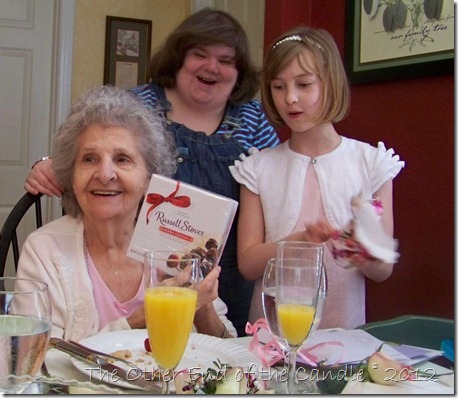 I went to Kansas City fully prepared – laptop computer and printer in tow, but for whatever reason, I couldn’t find my file in my laptop, or remotely on my desktop at home, when the time came to print it that morning. Thankfully, I had the entire family ready to go ahead of schedule and we had more time than I expected for traveling to the cemetery, (note: never fully put your trust in a GPS…) so I tried to reconstruct what I had written. Brian took the kids down to the lobby of our hotel and I started writing.

I finished with just seconds to spare to get us there five minutes before the scheduled start, (I thought), and we were on our way. I had checked with family for the correct address the night before and the trip was only going to take half the time, according to the GPS, than I had expected it would.

Long story short – we were late. It was embarrassing and horrible, but there wasn’t anything I could do about it. I was even more embarrassed to find out later that they had delayed starting (in the -7 degree temps) hoping we would get there.

And the real kicker? I never read what I had taken the time to write.

But I believe in the Lord’s timing and trust His plans, even if I don’t understand them. He works all things together for good for those that love Him and are called according to His purpose. (Romans 8:28)

So today I share what I wrote that morning. I know you didn’t know my Gramma, but trust me when I say that she was a wonderful woman.

Gramma was just a couple of years younger than I am now when I was born, which is pretty unimaginable in itself. But she really knew what she was doing. She was an expert at grand-parenting from the get-go. 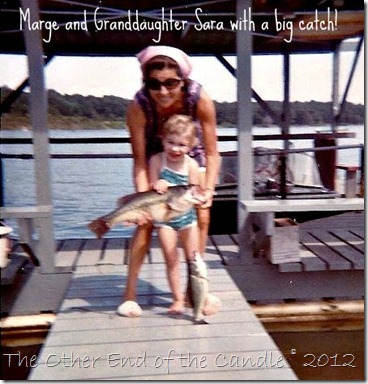 She told me so many times about how “tickled” she got the Christmas that I was three years old and received my first trike. She was putting it together and I got in there with her, whacking away with a hammer, “helping” the only way I knew to.

When I was four, and my mother was still a staunch believer in the myth that hair would grow in thicker if you kept it pixie short, Gramma was there to the rescue with my very own, frosted, shag wig. While mom didn't want me wearing it in public, Gramma even let me wear it to the grocery store when I was with her. 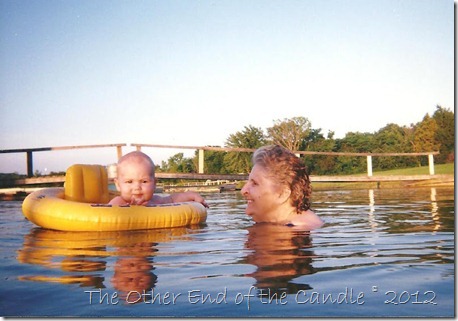 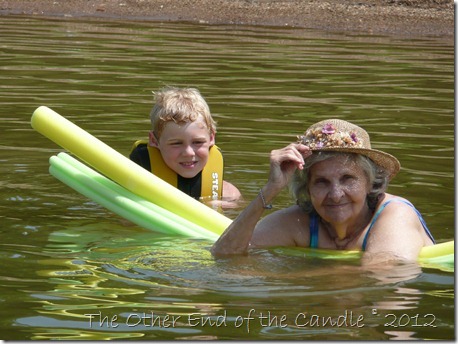 I loved sleep-overs at her house – she'd let me play dress-up with her silky clothes, high heels, a little lipstick and even some sparkly baubles from the top drawer of her dresser. My favorite part was snuggling down between her and Grampa at night in their giant king-sized bed while watching Johnny Carson. 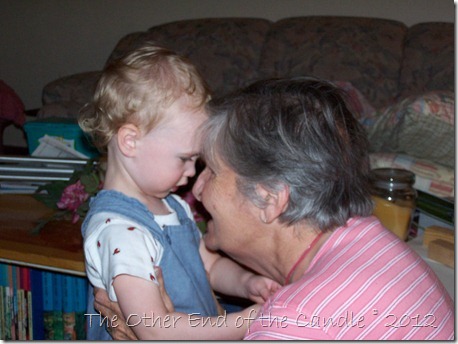 I was never afraid sitting on the gas tank of one of the mini bikes when she would putter us down to the “bubblegum store”. She was an excellent driver – even when making ambulance runs to the emergency room post dog-bite or at what seemed like 100 miles an hour around dead-mans curve on the way to Bolivar. 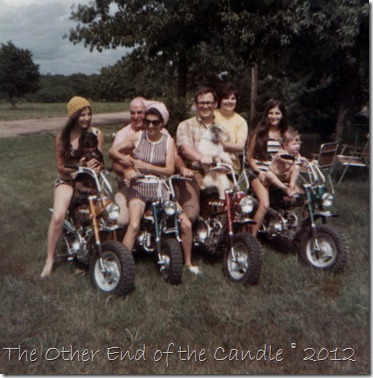 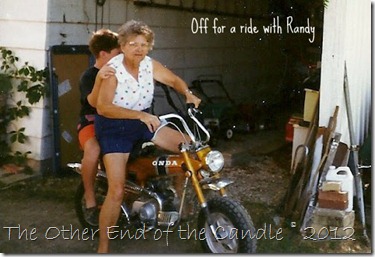 She was a superior craftswoman – teaching me my first chain stitch at 8 years and crocheting me afghans that kept me warm at night when I was away at boarding academy (and also saved me from having to make my bed each day.) One of her crocheted angels still sits atop of one of my Christmas tree every year. One project she never finished, that I'd always wished she would, was making a Santa's Sleigh from a turkey carcass she kept over the the stairs to the basement. That one always had me wondering and I fondly think of her each time I see a turkey dressed. 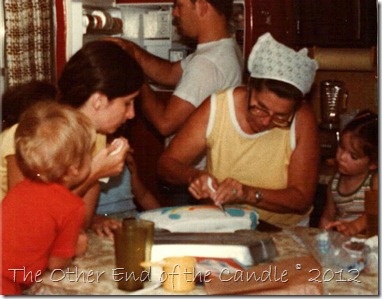 Do I need to mention her culinary skills? Gramma was there to teach me the art of making turtles with leftover biscuit dough, and tiny cinnamon rolls with extra pie crust bits. I believe she had the first microwave oven ever invented, (which might still be on the counter down at the lake) and the only red refrigerator I've ever seen. Gramma made my birthday cakes several times, the most memorable were a doll cake with a full skirt and then when I turned 8, it was the first two-tiered cake I'd ever had. Yellow and green with a little turtle on top playing a grand piano. But no matter what she made, you felt blessed, whether it was bologna on white bread with the crust cut off, Beef stew, chicken and dumplings, wedding cakes or pies... Oh, the pies...

I don't think I realized just how fragile she was at the end – it was hard to notice when she would still sit cross-legged in her chair. She would still smile so big when I would walk in the room. I'd give her a big hug and kiss and remind her who I was, “her favorite grandchild” and then she'd swat me – because I knew better than to accuse her of playing favorites. The fact is, no matter who was with her – we knew we were her favorite.

Of course I miss her. I miss the smell of her dusting powder, her whistling through her teeth, singing silly songs from the 40’s, her teasing and her big smile.

Nothing will be better than meeting her again when the Lord returns – no burn scars, no bald spot, no aching back, but still with that spry personality we all will miss so much until then. 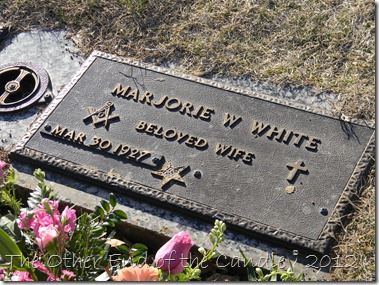 1 Then I saw “a new heaven and a new earth,” for the first heaven and the first earth had passed away, and there was no longer any sea. 2 I saw the Holy City, the new Jerusalem, coming down out of heaven from God, prepared as a bride beautifully dressed for her husband. 3 And I heard a loud voice from the throne saying, “Look! God’s dwelling place is now among the people, and he will dwell with them. They will be his people, and God himself will be with them and be their God. 4 ‘He will wipe every tear from their eyes. There will be no more death’ or mourning or crying or pain, for the old order of things has passed away.”

5 He who was seated on the throne said, “I am making everything new!” Then he said, “Write this down, for these words are trustworthy and true.”

6 He said to me: “It is done. I am the Alpha and the Omega, the Beginning and the End. To the thirsty I will give water without cost from the spring of the water of life. 7 Those who are victorious will inherit all this, and I will be their God and they will be my children.